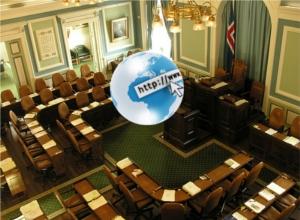 The newest government in the world was designed with help from comments on the internet. God help us all. After Iceland’s economic collapse in 2008, the island nation decided it was time to write a new constitution, this one not based on its parent country of Denmark but rather made from the original ideas of its citizens. Iceland’s small population of 320,000 elected 25 assembly members from 522 ordinary candidates (including lawyers, political science professors, journalists, and many other professions), who in turn opened their process up to the public in an unprecedented fashion. The Constitutional Council was highly active on Twitter, Facebook, YouTube and Flickr, where they solicited comments and suggestions for the new government. On Friday July 29th, 2011, the Iceland parliament officially received the new constitution, comprised of 114 articles divided into 9 chapters. Set to be reviewed, and then put before vote for ratification by October 1st, the internet-assisted document marks a possible paradigm shift in governing. In the 21st Century, we’re writing our constitutions with social media. The future is a crazy place.

From the elections to the website, Iceland has gone to great length to make their citizens feel involved and enabled by the process of writing the new constitution. Candidates for the constitutional assembly gathered thousands of signatures to appear on the ballot, and discussed their views publicly on 50 radio show presentations. The candidates also wrote about themselves on public websites including Wikipedia and Facebook. After The Constitutional Council was formed, there was a constant upstream of their proceedings to Twitter, and Facebook, along with regular photo updates on Flickr. You can find videos of The Constitutional Council on YouTube, but they’re in Icelandic. Just to give you a taste, here’s the inaugural meeting…opening with a song!

In many ways then, the new Iceland constitution was the first to ever be born completely in the public eye. Sure, constitutional assemblies are often open to some sort of public scrutiny, but Iceland’s was broadcast on the internet. Council members regularly interacted with commenters, and every week the latest drafts of the various chapters (or the work related to their writing) were shared via a public website. Live broadcasts of the open council meetings were shown every Thursday via their site as well as Facebook. There was even a regular e-newsletter. Iceland used the web like never before to open up their process to the world and attract the attention of their public.

Yet the enthusiasm from the public hasn’t exactly been stellar (maybe they didn’t like the singing?). Despite the historic nature of the constitutional elections, little more than a third of Iceland actually voted (83,531 or 35.95% of the ~230,000 eligible voters). That election, by the way, was deemed invalid by the Supreme Court of the nation due to problems with voter privacy, and the parliament had to eventually appoint the same elected candidates to the Constitutional Council in order to get things rolling. It’s unclear how that debacle tainted the opinion of the council in the eyes of the Icelandic public. While the social media presence has been active during the writing of the constitution, the main website only garnered about 1600 comments. That’s certainly a lot for the Council to wade through, but I’m not sure you can call it a mandate from Iceland’s people – especially when you consider many comments were made from interested parties from all over the world.

The lessons we are to learn from Iceland’s new constitution, then, are a mixed bag. It’s absolutely amazing that an entire structure of government was made with help from social media and in total view of the world. Anyone from Reykjavík to Rio de Janeiro could watch and even give input to how Iceland should be governed. But that didn’t guarantee widespread public support nor even success. The new constitution is 700+ pages of ideals that may or may not be ratified come October, and whose ultimate benefit to Iceland is uncertain. Crowd-sourcing a constitution was a remarkably ballsy move, but it will take years before we know if it was a smart one.

1000 points to Iceland for being progressive, daring, and crazy enough to undergo this revolutionary approach to government formation. 1,000,000,000 points to whoever can find a way to learn from this example and successfully leverage the power of social media to truly make the world a better place to live.