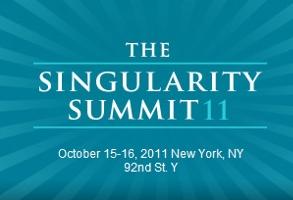 Watson, Watson, Watson. Your computer wiles have really seduced all of us technophiles this year. Singularity Summit, the annual TED-style gathering of scientists, futurists, and tech-enthusiasts will be in New York City this year October 15-16. The theme for 2011: what does Watson’s victory mean? The IBM system capable of human-like language skills took on the best and the brightest on Jeopardy! in February, and won hands down. Now, as we’re still figuring out what that exactly means for the development of human level artificial intelligence and the future of mankind, Singularity Summit is ready to ramp up the discussion. Jeopardy! champion, Watson opponent, and all-around fun guy Ken Jennings will be on hand, as will Singularity spokesman Ray Kurzweil, and PayPal founder Peter Thiel. There will be dozens of speakers, panel discussions you’ll see no where else, and of course hundreds of attendees who share a fervent interest in how technology will shape our future. All at the famous 92nd Street Y. Tickets are still available, so check it out now. You don’t want to miss one of the most enlightening discussions to be had this side of the Singularity.

I attended my first Singularity Summit last year, and was surprised and happy about the breadth of topics covered. Sure, artificial intelligence took up a lion’s share of the presentations, but there was plenty of synthetic biology, nanotech, and general scientific philosophy to keep my head reeling for weeks afterward. Watson serves as an exciting center piece for the 2011 Summit, but you should still expect the computer’s victory over Jeopardy! champions to push the conversation to every corner of technological interest. And with Jennings himself giving an address, you can bet there will be plenty of wry, yet insightful humor about the practical implications of Watson’s success.

If the first video of Jennings getting whooped by Watson doesn’t show off his cool under fire demeanor, the second clip (a favorite of mine from his record breaking run on Jeopardy!) definitely will.

As always, we should expect futurist Ray Kurzweil, who’ll be opening the Summit, to play an influential role. He’s been testing out his material on the Watson victory since April, so hopefully we’ll get a nuanced and insightful look at how this development shapes his vision for the future. With his predictions forecasting nothing less than humanity’s complete blending with machines, you can bet Kurzweil will have much to say about Watson’s impressive language skills and how human such a computer system may really be.

The Singularity Summit is always a mind-awakening experience. Last year I got to play music on water, talk to a child robot, and watch a magician trick some of the smartest minds in the world. If you’re at all interested, I recommend you register and attend. At $300 a day (or $485 for both days), Singularity Summit 2011 isn’t the cheapest conference out there, but it is one of the best.

As always, Singularity Hub will keep you up to date on Summit news as we lead up to its arrival in October. Check in with us regularly to hear more about the speakers, special guests, and surprises in store.