Google recently revealed that their data centers and operations around the world consume a whopping 260 million watts, or roughly the equivalent of 200,000 homes in the United States. While that’s an enormous amount of electricity, it pales in comparison to the amount that Google wants to create from investments in renewable resources: 1.7 gigawatts. More than enough to impress Doc Brown. Yet neither Google’s massive hunger for power, nor their dedication to green energy may ultimately be as impacting as their third claim: that Google products are the most cost efficient and environmentally friendly choices for businesses. Does going green mean going Google? One thing is for certain: as the titan of search continues its phenomenal growth, they reveal that their strategy is just as ambitious as their scope.

That Google consumes as much electricity as 200,000 households is very impressive, and it gives you a sense of how truly enormous this company has become in the past decade. The New York Times (who originally reported the 260 megawatts figure) puts that power in perspective by stating that it is roughly equivalent to 1/4 of a nuclear power plant, though I would have said 1/2 of a typical coal burning plant. In any case, the message is clear: Google is consuming electricity on the level of a (not so) small nation.

In the past Google has been seemingly loathe to reveal its power needs for fear that it may give away too much about their inner workings and data center deployment. Apparently, however, those fears are no longer an issue, as Google’s official blog and the Google Green website revealed even more about their power needs and their plans for the future in a new section titled “The Big Picture“. On every level, Google’s Big Picture is showcasing how they are deploying innovative, future-minded strategies to secure their energy needs. To date they’ve invested $780 million in renewable energy resources, hoping to create 1.7 billion watts of electricity. That’s considerably more than they’ll need in the next few years (though who doubts they’ll eventually require as much if not more?). Google Green also mentions that 25% of their electricity came from renewable sources in 2010, a figure they hope to increase to 30% for 2011. (They’ve been a “carbon neutral” company since 2007, buying offsets to balance their non-renewable energy.) The Google Green site is awash in videos demonstrating new ways they improve efficiency in their data centers, many of which are too esoteric to appeal to a general audience. One idea, however, is too cool not to share. In Hamina, Finland Google uses a salt water cooling process to keep their servers chilly. Check out the setup in the video below:

The big numbers about electricity and the focus on renewable energy, however are hiding the quiet but potentially industry shifting claim that Google exceeds all expectations with their efficiency. At the individual consumer level (which is forefront on Google Green) Google tell us that providing a user with a month of Google products requires about as much energy as running a 60 watt light bulb for three hours (180 watt-hours). In case you don’t use old incandescent bulbs anymore, The Big Picture gives you plenty of other comparisons: a year of Gmail is equivalent to making one bottle of wine, 3 days of YouTube requires as much energy as to make just one DVD,etc. 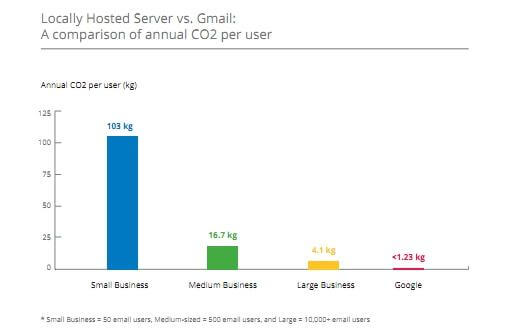 Dig deeper and you’ll find this amazing report, which describes how cloud-based products, like those offered by Google, represent an enormous increase in efficiency compared to in-house server solutions. In some cases, Google claims that Gmail is 80 times more efficient than traditional systems. 80 times! Even against their data center competitors, Google claims to be twice as efficient. Not only that, but they compound their efficiency with their renewable energy habits to show that the carbon footprint of their services is a small fraction compared to other solutions. 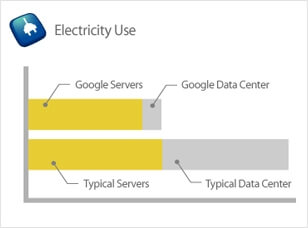 From green energy to efficiency, Google’s message from these announcements is clear: “We not just using more power than you, we’re using it better.”

Which is a very powerful message. In the ongoing efforts to “go green” businesses are pursuing a variety of changes to improve their carbon emissions and their public image. Environmental consideration is big business. Google has essentially pulled that business into their laps. Why spend millions on innovating your electronic services when you can just switch to Google products? Products which, at least on a small business level, are essentially free.

Yeah. I know what I did. I use Google products all the freakin’ time.

Looking forward, it seems clear to me that Google plans on being the best at what they do at every level of their business. Google is not only investing in new energy resources, it has secured the rights to buy and trade energy as well. They not only are pushing for greater efficiency, they are trying to attract more users with that efficiency…which will help them further increase their efficiency. They are collaborating with other groups with similar goals in energy to form networks that raise the bar and enable new technologies in the field. You can look at Google’s impressive energy consumption numbers and say, “wow, these guys are huge” or you can look at their strategy and realize, “my God, they are going to get astronomically larger”. Bottom line, Google wouldn’t have made a big deal of announcing these numbers if they didn’t have a lot to gain from their release. A green mentality, great efficiency, and gigawatts of future energy all add up to one thing: Google’s growth is going to be irresistible.