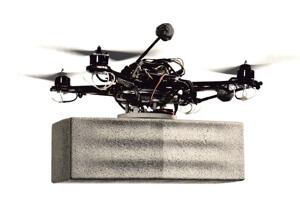 A new generation of architects is on the march. Leaving their rulers and compasses behind, these builders are trading in their blueprints for algorithms and putting the finer details of design in the hands of robots. This December, two Swiss architects and an Italian robotics engineer will, for the first time, build a tower solely by flying robots.

The demonstration, called “Flight Assembled Architecture“, will take place at the FRAC Centre in Orléans, France. Fifty quadcopters will take to the air simultaneously and work together to position all of the 1,500 prefabricated foam blocks. When it is completed the tower will stand 6 meters tall (19.7 feet) and 3.5 meters wide (11.5 feet). That’s a significant chunk of the 10 x 10 x 10 meter airspace that the 50 quadcopters get to work in. Custom built electronics and onboard sensors enable the precise control needed to dance together so dangerously close. The robots can be pre-programmed for flight paths that might include arcs and spirals, and a fleet management program takes over when the vehicles fly too close to avoid collisions. The program also automates take-offs and landings. A state-of-the-art motion capture system will track the robots simultaneously at a rate of 370 frames per second with millimeter accuracy. The tracking computer will send flight commands wirelessly from a control room nearby.

The coordination and precision required to build the tower with 50 quadcopters accident free will be challenging. But watch them in action, dancing beautifully through the air in the following video and I think you’ll agree that they’re up to the task.

The tower was conceived by Swiss architects Fabio Gramazio and Matthias Kohler at ETH Zurich and robotics engineer Raffaello D’Andrea from Italy. Gramazio and Kohler’s research at the university explores the new area of additive digital fabrication. You can think of their robots as large scale 3D printers, building layer by layer. To harness the power of digital tools in architecture design and construction, the team is formulating algorithms that intertwines both structural logic and aesthetics. They call it “informed” architecture.

The tower is just the latest of Gramazio and Kohler’s digital constructions. In 2008, R-O-B, their large, one-armed robot built a 100-meter, meandering wall at the “Explorations” architectural exhibit in Venice. Building the sculpture, called “Structural Oscillations,” is not as simple as it might seem. Being placed in the exhibition’s pavilion, the wall – essentially a stack of unmortared bricks – had to not topple over and crush attendees as they walked past it. A straight wall would have been dangerously unstable, and the oscillating curvatures added structural support. But the robot had to decide just how curved each segment would be. Segments varied both in amount of curvature and brick rotation. Places where the wall straightened would lean, but the swing of the entire wall would pull taut and compensate with increased stability. I mention these architectural elements only to highlight the complexity of the robot’s task. And it accomplished its task, in the end, placing 14,961 individually rotated bricks with its algorithms.

The quadcopters will work the same way, but in addition to adjusting to the placement of the blocks, they’ll have to adjust to each other as well. D’Andrea, a professor of Dynamic Systems and Control at ETH Zurich, brings expertise in autonomous systems to the team. With an emphasis on adaptation and learning, he hopes to change our perception of architecture from a standardized process to a dynamic one. He developed the Flying Machine Arena, the “controlled sandbox” for mobile robots that the quadcopters performed in in the video. D’Andrea is also the co-founder of Kiva Systems, the warehouse robots that fetch merchandise instead of people.

If you happen to be in the Orléans area and want to check out the exhibition, it will begin December 2nd and run to February 19 of 2012.

Although the team strives to push the boundaries of automated architecture, at the moment their creations are more like works of art. No doubt it will be quite some time before humans begin handing over their mortar shovels and bandsaws to the robots. Right now the emphasis on algorithm-driven materialization is more philosophical than practical. But letting computers take over the creative process can yield some truly stunning creations. Who knows what robots might build in the future by following their structurally sound yet unpredictable algorithms? It could be said that Gaudi followed a similar rule.