The social network is soon to be filled with stars…not celebrities, but actual celestial bodies. The GLObal Robotic telescopes Intelligent Array (GLORIA) is a €2.5 million project (~$3.4M USD) that will, for the next three years, provide open access to research class robotic telescopes around the world. Spear-headed by Francisco Sanchez at the Universidad Politecnica de Madrid, GLORIA will eventually include 17 telescopes on 4 continents, gathering mountains of data that users can help analyze and discuss. Yet the project will be more than simply crowd-sourcing data crunching to the internet: through a system of social karma, participants in GLORIA will be able to actually direct the robotic telescopes and control where they look in the sky. By combining astronomy with Web 2.0, GLORIA aims to gather widespread interest from the internet, and perhaps even accelerate science with the power of the crowd.

Those that speak Spanish may enjoy the following interview of Francisco Sanchez as he discusses GLORIA in Spain:

Officially started on October 1st of 2011, GLORIA will be rolled out fairly slowly, with probably only six or seven of the telescopes available in 2012. Two of the seventeen telescopes haven’t even been installed yet. Despite the staggered launch, Sanchez and his colleagues are operating from a well-established model. The Montegancedo Observatory (affiliated with the Universidad Politecnica de Madrid) is a 10 inch robotic telescope that can already be accessed online via special software called Ciclope Astro. Developed in part by Sanchez, Ciclope Astro is capable of controlling and managing accesss to the telescope, as well as organizing its images and collected data. As GLORIA expands to eventually include all seventeen of its planned telescopes, Ciclope Astro should be able to serve as the hub for the evolving social network that will form around the project.

Prospective members of GLORIA include both professional and amateur astronomers, but it will be open to anyone with an internet connection, web browser, and interest in the skies. Data analysis is likely to form the bulk of the scientific efforts performed on GLORIA – there is always more information collected than any scientist, or even lab, can handle on its own. In this way, GLORIA will be very similar to Zooniverse, Galaxy Zoo, Planet Hunters, and the European Virtual Observatory, all of which give the public (in some form) access to raw astronomical data in exchange for assistance in processing it. The primary difference, of course, will be that GLORIA will also allow for direct control of its associated robotic telescopes. Through a karma system (probably dependent on both activity and public opinion on this specialized social network) users will be able to determine what projects the telescopes pursue, and even where the lens is pointed in the night sky. That sort of access is remarkable for a project on this scale and is likely to garner a lot of attention among amateur astronomers around the world.

There’s certainly potential for GLORIA to lead to significant discoveries in astronomy. Many previous scientific projects that took advantage of crowd-sourced analysis or problem solving have met with large successes in the past few years. Moving past data analysis, having the crowd actually direct astronomical research, either in whole or in part, is a rare experiment to see in action. Who knows where citizen scientists will point the telescopes of GLORIA – the associated equipment for the project could serve well in the search for exoplanets, gravitational lenses, supernovae, space debris or near Earth objects. More importantly, there’s little understanding if public interests will actually generate meaningful insights into the cosmos. Crowd-sourced analysis has a proven track-record, crowd-decided science is far less tested.

With plenty of funding, a wide assortment of telescopes at its disposal, and the potential to be extended beyond its three year term, GLORIA is poised to make a big splash in astronomy. If it succeeds, it will add more fuel to the crowd-sourced analysis trend that has been a growing part of astronomy since the rise of the internet (and depending on how one defines crowd-sourcing, since the very conception of astronomy). The social networking part of GLORIA adds another facet of crowd-sourcing for astronomy, and science as a whole, to explore, and success for GLORIA could mean variations on this theme popping up through all the different fields of academia. Yet Web 2.0 is not the only new challenger ready to fight for dominance in astronomy. Automation is changing the way data is collected just as artificial intelligence is changing how data is analyzed. Even if crowd-sourcing continues to gain ground in science, it will probably be as a partner to non-human researchers. In that light, the social-decision making aspects of GLORIA may be the most profound. In the end, choosing what science pursues is possibly the last such task for which humanity will be needed. 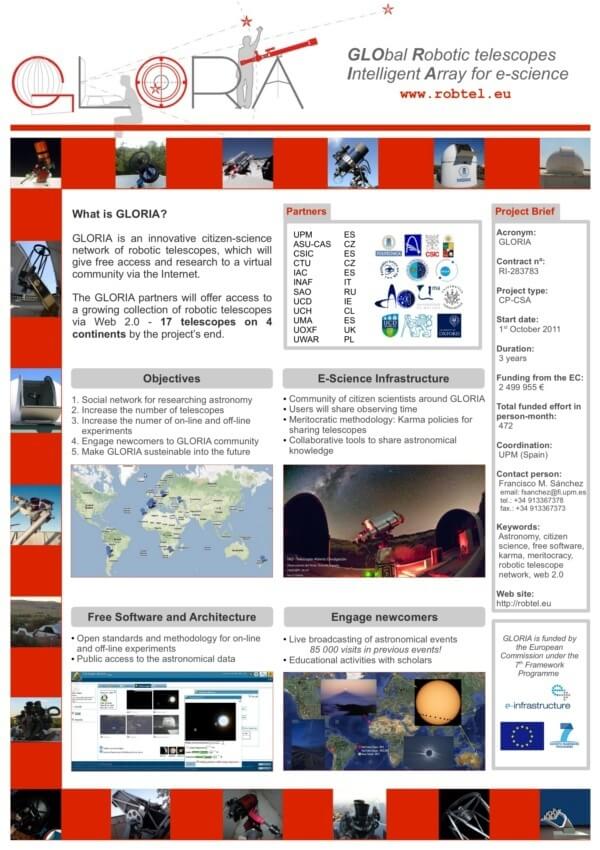