It’s tough being an avid mobile device user these days. First, carriers tempt you with the latest feature-packed devices while promising to satiate your content fix, then they hobble your data plan and shun you for hogging the network. Now a scathing report of a survey conducted by the British mobile consulting company, Arieso, makes you look as bad as a hedge fund manager. Smartphone users who snagged an iPhone 4S since its release in October are accessing two times the data that iPhone 4 users are using and three times the data of iPhone 3G users. The worst offenders, however, are using 3G modems or USB dongles for laptops, consuming over 8 times the data of iPhone 4S users. And if you literally live on your device, you are part of the 1% of extremists consuming 50% of the data on the network. As the survey found that average device demand is increasing by 40% per year, Arieso warns mobile operators that things are only going to get worse in the next year. Yikes.

The survey tracked the data usage of 1.1 million European mobile subscribers in both urban and suburban areas over a 24-hour day. Now, it’s important to realize that this is not a comprehensive study.  Comparing multiple carriers, usage broken down by time or day of the week, and a host of other variables would permit more systematic analysis of the mobile landscape. As it had in a previous 2010 mobile survey, Arieso used data for calls, uplink and downlink volume for the iPhone 3G as its usage benchmark. The report focused on three aspects of mobile use: a usage survey of mostly smartphone and some tablet (iPad and iPad 2) devices, the extreme users, and suggestions to mobile operators about meeting the network strains.

Here are the highlights of the survey:

1. Google’s HTC Nexus One has the most data calls per subscriber (this was true of the 2010 survey too): It had over twice (2.21x) as many data calls as iPhone 3G subscribers. This includes user initiated voice and data calls, as well as the automatic transfers between the device and network for updates and location information. Now, it’s completely speculative as to why Nexus One holds this top spot, but Arieso suggests it may be ease of use, which is debatable as it is a four-step process to make a call on the phone. Or perhaps Nexus One users simply use the device for its original, antiquated role (a phone), regardless of how marginalized that function is nowadays.

2. Uplink data volumes on the newest smartphones are as much as 3.2 times higher: This one isn’t a surprise if you take into account the improved camera quality/functionality of the latest phones. Take a look at the chart and you can see that the guilty culprits are the iPhone 4S, upgrading the iPhone 4’s 5 megapixel camera up to 8 megapixels, and the HTC Desire S, which added a front-facing camera to the HTC Desire for video chats and all those duckface photos filling up Facebook. So what does it mean that these two smartphones, the latest in their respective lines, are using more than three times what iPhone 3G users upload? The trend suggests that the iPhone 5 (and whichever HTC phone can rival it) will only increase user-generated data uploads even more.

3. Downlink data volume is also increasing, as much as 2.8 times higher: Although the survey found that downlink volume is up by 176% in general, the iPhone 4S is the frontrunner with users downloading significantly more than with other phones. Also, Arieso found that users still download more than they upload, 7 times more in fact, which means that smartphones are primarily pull devices and will probably remain so for a long time, especially with the increasing number of apps available for both iOS and Android smartphones.

4. Don’t blame iOS users for traffic: Apple recently released their record-breaking quarterly sales covering the holiday period. Amazingly, 37 million iPhones were sold and the majority were the iPhone 4S. That means more iPhones were sold per day than children born around the world, according to CNET. Furthermore, Apple sold over 15 million iPads and indicated that 85 million people are now using Apple’s iCloud service. It would be very tempting then to analyze the data usage from the charts and conclude that Apple is causing some major problems, but the reality is that the worst data hogs are those using 3G modems. While there aren’t as many of them as those using Apple products, they upload 8.3 times as much and download 8.8 times as much as the average iPhone 4S user. And that trend is likely to continue as the iPad looks much more like an iPhone than a PC, in terms of data volume. 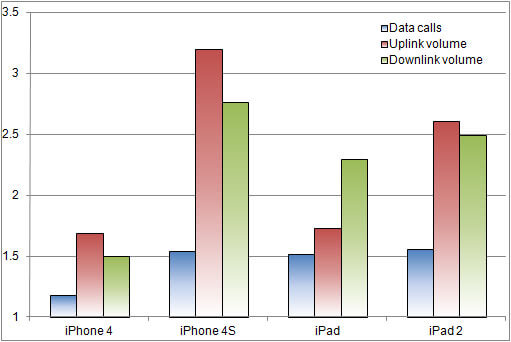 5. Extreme users are becoming even more extreme: The network stats are pretty lopsided, which is going to force mobile companies to corral high-end volume. The top 10% of subscribers are eating up 90% of the downlink volume, while the top 1% consume 50% of it. And if you cut it even thinner, the most voracious 0.1% are responsible for 20% of that volume. Based on previous surveys, Arieso states the trend is increasing, or as their report puts it, “the hungry are getting hungrier.”

Top mobile carriers have been nerfing their plans by eliminating unlimited data over the course of the last two years amid protests from mobile phone users, but the Arieso report reveals why it is necessary. Current networks clearly cannot handle the extreme loads that high-demand smartphone users place on them. In fact, an Ericcson report from last November predicted that mobile data traffic would increase 10 times in the next 5 years. Users who are downloading large amounts of content needed to be leashed in order to ensure network stability for all.

In the end, we all know mobile is the future, and one might even say we are in the heyday of the smartphone as both the hardware and software is being gobbled up across the world. Mobile companies will have to kick it into a higher gear to meet user demands and remain competitive at the same time. Don’t be surprised if data plans become even more capped, get more tiers and increase their overage penalties.