A recent poll from Ipsos/Reuters shows the extent of workplace evolution as well as the fallout of globalization. Nearly 1 in 5 (17%) of the over 11,000 users from 24 countries polled online indicated that they work exclusively and/or consistently from home. Telecommuting is most popular in regions with emerging markets, such as Asia-Pacific (24%), the Middle East and Africa (27%), and Latin America (25%), while North America and Europe (both at 9%) lag significantly behind. But the winner is India with 82% telecommuting at least once a week and 57% working remotely on a routine basis. Compare this to the U.S. where 26% are working remotely at least once a week with only 10% respondents doing so consistently. Yet times are changing as the recession has spurred companies and employees to find creative ways to cut costs. More companies are seeing the benefits of telecommuting and some states are now starting to encourage it with tax breaks. Is this the beginning of the end for the physical workplace and, if so, what does a telecommuting world look like?

A closer examination of the poll results affords a picture of what a global telecommuting workforce will look like.

The poll, which was conducted during two weeks in October 2011, collected age, gender, household income, marriage status, and education level of users along with information about employment and whether the user was a business owner. While polling online users has an inherent bias in that not every worker has Internet access, especially in developing nations, the results can be taken as a good indication of where the world currently stands on telecommuting and its demographics.

The following key points serve as signposts for the future of the remote global workforce…call it The Good, The Bad and The Ugly: 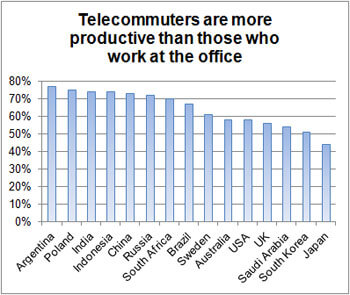 1. Increased productivity — Two-thirds of workers (65%) claim increased productivity working at home (echoed by a Cisco survey as well), while the other third cite decreased supervision and more distractions as the reason for lower productivity. Countries in which the most workers agreed that telecommuting was more productive include Argentina (77%) and Poland (75%), but it was significantly lower in some countries, such as Japan (44%) and South Korea (51%). This goes against popular stereotypes that remote workers are goofing around all day because no one’s there to tell them what to do as well as casting a poor light on workplace efficiency. Additionally, it suggests that certain cultures are more adaptable to a telecommuting lifestyle, which has the potential of expanding job markets beyond local candidates to broad and diverse international workforce.

2. More female workers — 83% of all respondents felt (36% strongly agreed, 47% somewhat) that telecommuting keeps talented women in the workforce, instead of leaving temporarily or completely to raise children. U.S. users were slightly more skeptical about this with only 26% strongly agreeing and 53% somewhat. From a globalization point of view, entire workforces that couldn’t come into an office because of the “homemaker” label have increasingly entered the workforce as remote work allows for the multitasking of home and work life. This too expands the global workforce.

3. Less stress — In terms of commuting, 83% agreed that telecommuters have less stress because they don’t have to get to and from work every day. And less stress is always good. 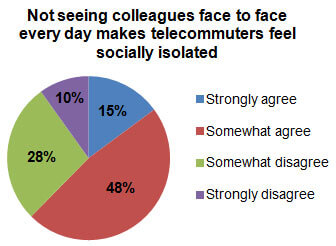 1. The loneliness number — Six of every ten users (62%) felt that social isolation among telecommuters was a problem, with 15% saying they strongly agree and 48% somewhat agreeing. Does this indicate that a primary benefit of the physical workplace is face-to-face time? Considering that over half of respondents (56%) also said that working remotely hurts the chance for promotion, it reflects the importance of both workplace socializing and office politics. Remote workers can be left out of the loop and miss important, unplanned interactions that become measures of job performance. Furthermore, since many people become friends with their colleagues, it’s hard to imagine that friendless workers are good workers. Technological improvements in video conferencing, however, is likely to improve this gap, but technology can only go so far in replicating real life interactions (the Bruce Willis film Surrogates comes to mind).

2. More opportunities needed — If the opportunity was made available by their employer, 34% of all respondents said they would be very likely to telecommute full-time. So what’s the problem? Opportunities, or the lack thereof. One-third of the global workforce is basically saying, “Let me work from home” but the option isn’t being provided. Now 21% of all users said that they had jobs that required their physical presence, but technological advances in automation from the Industrial Age to today have increasingly reduced the need for human presence. The big problem is that telecommuting is growing in the very regions where demand is the highest (see the chart below). At some point, the lack of telecommuting opportunities on a large scale is going to handicap economic growth. 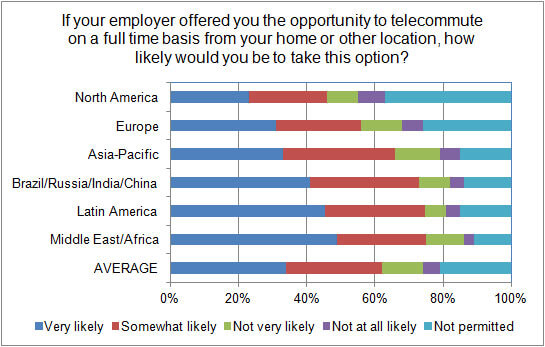 1. What price, paradise? — While the general consensus is that remote workers are better able to achieve a balance between work and family (with 29% strongly agreeing and 49% somewhat agreeing), a majority agreed that telecommuting creates more conflict by reducing the boundaries between work and family life. Taken together, these two statements seem contradictory, but what is more important is what they imply: people seem to be more comfortable with a compartmentalized life, even if its skewed one way or the other. When work and home life become blurry, greater balance may be achieved in managing everything at the expense of family strife. 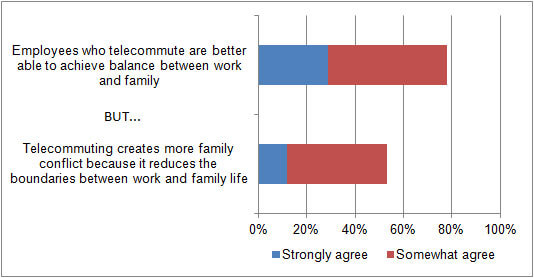 2. Another two-class system — In general, telecommuters have higher incomes and are more educated. One way of looking at this is that higher-paying jobs, which are often attained because of higher education, are offering more flexibility to workers who want to telecommute. Another way of looking at this is that the most educated, well paid workers will increasingly be absent from the physical workplace (like the two-thirds of government workers now telecommuting). This has the potential of creating another class system where telecommuting becomes equivalent to privilege afforded to the best or most capable workers, which could turn the workforce into something akin to what’s happening in schools with the segregation of students into gifted and regular learners. This would only exasperate issues related to the recently profiled class struggle that is seeing the withering of the middle class.

In summary, the future of telecommuting is bright, even though it clearly has its disadvantages. But for a long time, a paradigm shift has been occurring in the workforce. Attitudes about telecommuting are changing with very promising results. Considering that workplace environments and worker motivations differ from country to country, it’s no surprise that working remotely will be more successful in some countries that in others. But if telecommuting was made a priority by businesses and governments around the world and the infrastructures were built to support it, how different would the world look?