About two billion people worldwide suffer from visual impairments brought on by refractive errors when light entering the eye isn’t properly focused. Uncorrected common refractive errors like nearsightedness and farsightedness are the second leading cause of blindness in the world, accounting for 2 percent of the world’s population.  Recently I spoke with the team at MIT Media Lab that has created an impressive device that gives people in developing countries access to much-needed vision testing. The Near-Eye Tool for Refractive Assessment, or NETRA, does the job of conventional – and much more expensive – testing equipment. All you need is NETRA, which costs about $2 to make, and a smartphone.

Those of us who wear glasses are familiar with the phoropter, that ungainly array of lenses that optometrists flip in front of our eyes to see which ones help us read the eye chart better. From the optimal combination of lenses our refractive errors can be calculated and our prescriptions derived. Another tool is the more expensive aberrometer that maps aberrations in the eye using a laser. Unfortunately in many parts of the world people don’t have access to these devices and simply live their lives unassessed and without corrective lenses.

Until now. Because NETRA is essentially an inexpensive microlens array and pinholes, it is cheap to make and highly portable. Conducting an exam begins with clipping NETRA to the screen of a smartphone. The patient looks through a lens and sees a set of parallel green or red lines produced by special software on the phone. Using the phone keypad, the patient moves the two lines until they overlap. The exercise is repeated eight times for each eye with the lines turned at different angles. The microlens array overlying the smartphone changes the eye’s focal point throughout the testing. The errors that the patient makes attempting to overlap the lines are then used to calculate refractive error. And not only is NETRA much cheaper than conventional methods, it’s also much quicker. Testing both eyes takes about two minutes. 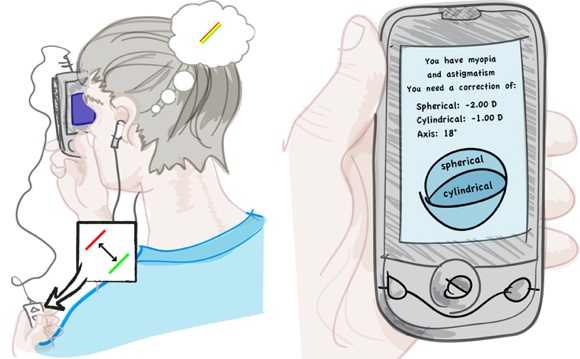 Together with cheap smartphones, like the $80 IDEOS vastly popular in Kenya, NETRA gives you an eye exam devices that’s almost cheaper than getting the real test at your local optometrist. Of course, cheap and convenient really doesn’t matter if it doesn’t work. I asked Vitor Pamplona, a visiting graduate student from the Federal University of Rio Grande do Sul and lead author on a paper published on NETRA, what kind of field testing had the device been through. “We had trials in India, Kenya, the US and Brazil. Results were really close to [those obtained] using other methods like retinoscopy, auto-refractors and subjective refraction. Since that time, we have improved our eyepiece to make it easier and simpler to use.”

Pamplona also told me he and his colleagues have used the technology in NETRA to detect cataracts, the leading cause of blindness in the world. This device, called CATRA, has already undergone trials in the US, India and Mexico. According to Pamplona, it “detects and quantifies cataracts in a way that no other medical device is doing today…showing position, size and density.” Part of the reason cataracts are so devastating is that early detection is rare. CATRA, like NETRA, is cheap (it costs $3 to make) and highly portable, making regular testing even in poor countries feasible and improving chances for detecting cataracts while they’re still treatable.

What else might the NETRA and CATRA be used for? Combined with other mobile health technologies, Pamplona thinks the sky’s the limit. “The eye is a mirror for the patient’s health. In the future, NETRA-like devices would be able to measure all kinds of conditions, from eye pressure to hypertension. It is just a matter of time. We will have a hospital at home, a complete set of monitoring tools for health and an integrated system to receive advice and take actions from a crowdsourcing network of doctors.”

As their main goal is to bring NETRA to parts of the world where the device would be the only option for refractive error testing, the team is negotiating with several partners in many countries. By delivering the best service at minimal cost, Pamplona says they hope to provide an “alternative to the worldwide health system where patient-doctor communication is enhanced by consumer-centric healthcare technology.”

Innovative technologies continue to bring services to the developing world that many of us take for granted. MIT Media Lab’s constant quest to transform everyday life is the technological antithesis to the status quo that everyone benefits from. The NETRA, Pamplona explains, “not only provides a cheap way to test our vision – on demand, with no doctors involved, and anywhere – but also impacts on a wide range of today’s problems that goes from a true Health 2.0 divide all the way to poverty.”