The call to action by Cambridge professor Timothy Gowers to boycott Elsevier last January has resounded with academics, as the number of signatures recently crossed the 9,600 threshold. Researchers across the world have come out in droves at times to sign the boycott at The Cost Of Knowledge website. The boycott targets Elsevier specifically for charging “exorbitantly high prices for subscriptions,” which forces libraries to buy expensive journal bundles rather than selecting individual titles like Cell and The Lancet, and for supporting measures such as SOPA, PIPA, and the Research Works Acts, all of which attempt to control the free exchange of information for corporate profit (Elsevier publicly rescinded its support for the Research Works Act).

The boycott has been covered by Nature, the Chronicle of Higher Education, and most recently, The Guardian. But, as Harvard professor Stuart Shieber pointed out on his blog about the daily signups asking “Have scientists lost interest again?”, the signatures started to taper off in early March, according to his numbers which are shown in the following chart:

While the momentum appeared to be flatlining, a resurgence in the number of signatures occurred in mid-March around the time that Singularity Hub brought the Elsevier boycott to the attention of its readers. After a few weeks, however, the daily signups withered to less than 10 per day. But the recent media coverage about the Wellcome Trust, the second largest nongovernmental funding agency of medical research in the world, reaffirming its support of the Open Access movement seemed to spur on the boycott as 273 researchers signed up in a single day.

Though the 10,000 signature milestone is on the horizon, the risk of losing momentum is real, just by looking at the chart. Another flatlining could make hitting 10,000 signatures weeks away. Yet, the milestone is vital to the Open Access movement as it is likely to trigger another firestorm of media coverage that will help keep the public informed about the importance of open access to scientific research in the midst of election news, racial clashes, and who is suing Apple/Google now.

Open access for academic research is reminiscent of the famous Greek myth about Sisyphus, a wise and prudent ruler, who was condemned by the gods to repeatedly roll a rock up a mountain where at the top, it would roll back down again. Albert Camus in his essay Myth Of Sisyphus, within which he explores the absurdity of human existence, said, “[The gods] had thought with some reason that there is no more dreadful punishment than futile and hopeless labor.” The Sisyphean damnation is a fitting metaphor for the Open Access movement faced with the absurdity of publicly-funded scientific research locked behind paywalls as it struggles to free academic research from an antiquated journal system.

With the 10,000 signature milestone in sight, it will take only a few hundred more signatures to help researchers take a big step toward breaking free from its own Sisyphean tragedy.

Here’s a nice infographic that sums up what the Elsevier boycott is all about: 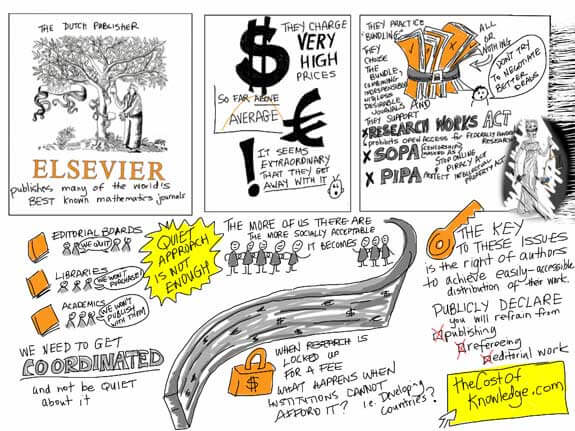