*UPDATE: Cary Huang, creator of “Scale Of The Universe 2”, answers some questions for the Hub. See his comments below.*

An interactive Flash animation titled “Scale Of The Universe 2“, covering everything in the universe from the fabric of space-time to the estimated size of the universe, was posted earlier this year, and it is awesome. A month or so later, it went viral, but why would something that comes straight out of an eighth grade physical science textbook become so popular? First, the actual scale of the universe is mind blowing as it spans 62 orders of magnitude (that’s multiplying 62 10’s together). Second, the animation is very well produced and packed with information to the extent that it’s an incredibly useful learning tool for those who are just curious to students learning about science. And finally, it was created by a 14-year-old, Cary Huang, and his twin brother, Michael, who worked on it for a year and a half as a fun project…that’s right, it was not a school assignment but an interest sparked from a seventh grade teacher showing a video of the size of cells.

While it is an incredible personal feat for the twins, the animation is also a testament to the creative and educational possibilities afforded by modern technology, and all the implications that that means for parents, educators, and publishers.

To get a sense of how cool “Scale Of The Universe 2” is, check out the YouTube video that shows off the animation:

Now, the size of things has been a topic of interest throughout human history, as even the Greek philosophers Democritus imagined such a thing as an atom in 460 B.C.  Aristarchus, in proposing the first recorded heliocentric model of the solar system sometime in the 3rd century B.C., concluded that the stars were very distant, implying that the universe was much bigger than the fixed spheres of the geocentric model (the original text in which he stated this has been lost). As scientific progress has advanced, a lot of time is invested in knowing exactly how big or small everything actually is, a theme that runs through each branch of science.

But the issue is how do we visualize such a vast range in scale? 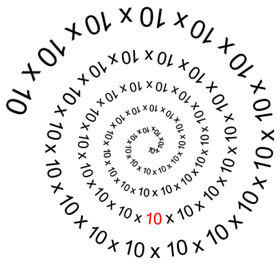 The problem is our direct experience occurs in such a limited amount of space. To appreciate the “human world” versus everything else, the figure to the right shows the expansion of 62 orders of magnitude (1062), so imagine each 10 as a level, where the one in red will be the 1 meter mark, which is approximately the human scale. It’s probably safe to say that all direct human experience occurs within 2 orders of magnitude smaller and larger than our bodies (by “direct”, I mean observation based on senses). Beyond that range, technology is required to visualize things, whether its a microscope, satellite imagery, or telescopes.

Beginning in the 1950s, the scale of the universe has become both a fascination for scientists and the public. In 1957, the Dutch educational reformer Cornelis “Kees” Boeke wrote an essay entitled Cosmic View: The Universe in Forty Jumps, which showed the 40 orders of magnitude between the nucleus of a sodium atom and the observable universe or from 10-16 to 1024 meters (you can see an online version of this book here). This book inspired several films including the Canadian produced Cosmic Zoom and the nine-minute film, Powers of Ten, made by Charles and Ray Eames for IBM in 1968 and re-released in 1977, which you can watch below:

In 1996, the National Air and Space Museum at the Smithsonian Institute released an updated 15-minute film about the scale of the universe in IMAX(R) titled Cosmic Voyage, narrated by Morgan Freeman, which you can see below:

But it was time for the power of the Internet to take over. In 1999, the team at the National High Magnetic Field Laboratory at Florida State University created a power of 10 Java applet called “Secret Worlds: The Universe Within” for their Molecular Impressions set of tutorials, which predated Google maps and involved drawings, photographs (35-mm and aerial), and microscopy. In over a decade, the page has clocked over 34 million views.

All of these visualizations are incredible and reflect how the medium to communicate ideas about the scale of the universe have evolved. In fact, check out the following table which summarizes this information:

What’s amazing here is that it took teams of professionals and big budgets to produce prior visualizations, yet the Huang twins produced their first version of the “Scale Of The Universe” in 2010 using images from the web and information off of Wikipedia and from astronomy books. The latest version is a more polished revision, but it also just adds to the library of their other Flash work at their website, which includes mathematics tutorials and humorous presentations. And it’s interactive – you can change the scale with the slider and click on each of the images to get a popup of information about it.

The point is 50 years of technology has made the production and distribution of something as profound as the scale of all things available to anyone including ninth graders, if only they are interested.

Currently, educational companies and publishers are spending huge sums of money producing web content to accompany print textbooks, and employing teams of people all over the world to produce Flash tutorials and other resources. Yet, they are bogged down in copyright usage, alignment to ever-changing state, national, and country-by-country standards, fact checking with primary sources, educational review by content experts, marketing at trade shows, contractual relations with school districts, and dealing with technological limitations in the classroom. It’s painful to think of all the resources going into producing works that will be highly controlled and cost so much to acquire that mass distribution is a joke. And frankly, they just don’t look as good as what the brothers Huang have created.

With so many tools (mostly free) available on the web, the numerous ways to distribute creative works, and the power of the web masses, we can only hope that more people of all ages take up projects of their own so packed with educational value and release them to the world to be the next viral video on science. Who knows? Perhaps science educators might see “Scale Of The Universe 2” as the perfect merger of creativity, technology, and science, and actually incorporate their use and production into the curriculum.

One can only look at the stars and hope.

*UPDATE: Cary Huang got back to Singularity Hub to answer a few questions about his work:

1. You clearly have some Flash expertise. How many years have you been programming?

Cary: I started using Flash when I was 10 years old. So about five years! You can see some more Flash animations I have done here.

2. What does it mean to you to have your project go viral and be watched by millions of people?

Cary: At first, it was shocking. I really appreciate all the views!

3. What advice would you give to other kids your age about programming or producing content for the web?

Cary: I would say that programming is easier for me if I teach myself than if someone teaches me (maybe that’s because I didn’t take any programming classes at first). I usually experiment, or search things on the Internet, if I don’t know. Not a very good strategy, but it works for me! Of course, a teacher is helpful to get you started. But after that, I think it’s easier to experiment for yourself!

4. Your website has a lot of other cool animations on it, including math. Do you have any other kinds of projects in the works or maybe a “Scale Of The Universe 3”?

Cary: Currently, I’m not working on a “Scale of the Universe 3”, but I have considered doing a “Scale of Time” or a “Scale of Population.”