Online education is witnessing its own Avengers-like uniting of superhero forces as Harvard University and MIT recently announced “edX”, a combined $60 million joint initiative to offer their college-level courses online for free. Launching in the fall of 2012, edX is a not-for-profit organization formed by the two universities to bring each institution’s free online course offerings to a broader global audience.

Courses will be delivered through the open source MITx platform in development to host courses that were previously part of the OpenCourseWare program.

As with the MITx initiative, edX plans to issue certificates (possibly costing a small fee) to students for completing courses; however, course completion will not earn college credits at either institution and the certificates will be issued from edX, not through either university.

The initiative hopes that other prestigious universities will join the venture to make the educational behemoth even stronger.

Susan Hockfield, president of MIT, gave an insight into the philosophy of the move poignantly saying, “You can choose to view this era as one of threatening change and unsettling volatility, or you can see it as a moment charged with the most exciting possibilities presented to educators in our lifetimes.’’

Although MIT’s online courses have been well publicized, Harvard was just getting into the game and weighed the best direction to go in, especially in light of competitive programs moving into the space, such as the for-profits Udacity, the Minerva Project and Coursera. Officials at Harvard ultimately opted to keep the program not-for-profit and partnered with MIT to utilize its technology, which is being designed to be much more interactive and supportive than previous course platforms are known to be. Additionally, the MITx technology will include automated grading software, also known as roboreaders, to grade the thousands to hundreds of thousands of essays expected from the sheer number of students in the program.

For either university, giving away its most valuable content for free seems to be the surest way to dilute their programs and on-campus experiences, but the reality is that the universities have much more to gain than to lose. First, MIT has spent years building a much more public educational brand by allowing anyone to take courses through OpenCourseWare, so edX is a way for Harvard to build on that marketing while offering the quality that is associated with the institution. Second, the MITx technology under development is an evolution of the online course software that both institutions have invested in over the years, so they come into this initiative with a clearer idea of what students need. Furthermore, by making the software open source, the global community is only going to help make the technology even better. 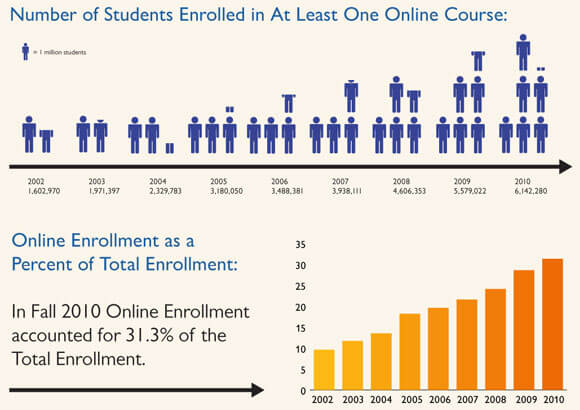 But one of the biggest hidden bonuses of this initiative is the research opportunities in education, technology, and online learning provided by such an enormous student base. The initiative is a giant virtual lab that will draw researchers from around the world who are interested in the future of online education and all the areas that it overlaps with.

Online education is ramping up and it’s quickly becoming about which platforms are going to dominate the landscape over the long term. Stanford University has already had some amazing success with online education, with over 100,000 students enrolling in a single artificial intelligence class last August. Although the world could benefit from having multiple options for free education, the possibility of Stanford joining edX would make even the Superfriends jealous.