What good is a 1-millisecond advantage? For humans, not much, but for a Japanese robot, it’s means victory every time…at least when it comes to the game of rock-paper-scissors. Researchers at the University of Tokyo have developed a janken (rock-paper-scissors) robot, that analyzes the shape of an opponent’s hand mid-play using high-speed video processing and counters in 1 millisecond with the winning move.

Scientists at Ishikawa Oku Laboratory (previously called the Ishikawa Komuro Lab) have extended their previous work with super fast robot hands and scanning systems that can record 200 pages in a minute to develop the janken system. In fact, the lab’s YouTube channel is brimming with videos demonstrating each robotics development that is sure to tantalize with the technological possibilities.

Check out the video of the janken bot to see it in action:

According to The Bunsen Burner, the system works by identifying the angle of the human opponent’s wrist joint, which is differentiated enough for each of the three moves to accurately make the prediction. On the surface, one might call this cheating , as Engadget did, but it’s cheating along similar lines as humans use to win. After all, the probability of scoring a win in rock-paper-scissors is 50 percent with random draws, which would render it completely pointless as a game if it weren’t for two factors that make it challenging: psychological manipulation and physical tells.

Whether playing rock-paper-scissors, chess, or poker, a variety of strategies can be employed to attempt to manipulate another player. This is the act of ‘getting in someone’s head’ to predict or direct moves. In fact, the World Rock-Paper-Scissors Society, which hosted championships, identified eight suggestions for manipulating opponents in the article “How to Beat Anyone at Rock Paper Scissors” (the website is currently down, but an archive of the article can be found here).

The other oft used strategy when playing the game is looking for tells. A tell is simply a physical indication of what a player is going to choose before they make their selection. Players study their opponents to learn their unique tells, which is why seasoned players adopt what is known as a poker face, that is, a consistent facial expression maintained throughout a game.

The janken robot is basically using the wrist angle as a tell, one that turns out to be the biggest tell of all for winning every time.

It’s amazing that a 1-millisecond advantage that provides predictions with 100 percent accuracy can be derived from a measurement of the wrist angle. But there’s a good reason why humans can’t analyze wrist angles to pull off the same feat. We’re just too slow at making predictions.

Recent theories about the visual system suggest that we perceive optical illusions — images that appear to be moving when they aren’t — because the human brain is attempting to anticipate what is going to happen next, based on what’s in the field of view. When light hits the retina, it takes one tenth of a second for the signal to travel to the brain and be processed by the visual perception system. Because that fraction-of-a-second delay could be detrimental, the brain compensates by making predictions about the near future, especially when it comes to anticipating movement.

Here’s one of the best examples of the visual system going wonky as it tries to make predictions about motion: 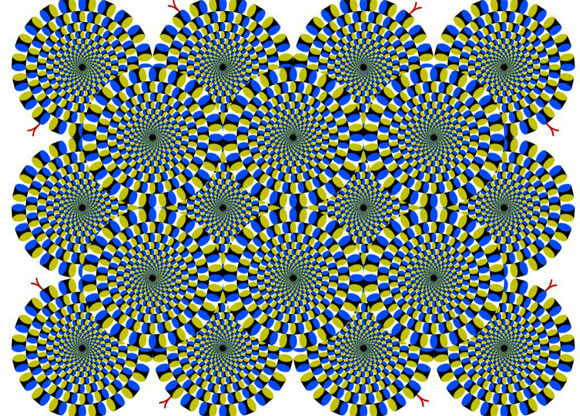 Fundamentally, the brain makes predictions by analyzing the visual data in its field of view, such as hue, brightness, and contrast, and interpreting that information into displacements and trajectories. This is hard wired into human vision such that we don’t really notice that this process is always going on until something strange is observed, and then dub it an optical illusion.

So the human brain itself processes visual data and makes predictions in a related way to the janken robot. It’s just that the robot is faster than humans by around a factor of 100.

Ishikawa explained to Voice of America that “Every one millisecond the image processor decides, recognizes the shape [the human hand is going to make]. And after one millisecond can make a winnable shape, one millsecond later than a human being. Only one millisecond. But a human cannot see this difference because the human eye is very slow.”

This latest work out of the Japanese lab was named “Human-Machine Cooperation System” because the robot relies upon the shape of a human hand for input. This is similar to the Festo ExoHand, which allows users to operate a robotic hand remotely and with a great deal of accuracy. The algorithms of the janken robot also predict human behavior, something that can be done with the crowd in the digital world, such as Amazon recommendations and Google ads, thanks to big data, but will be vital for the development of future technologies and humanoid robots, if the Uncanny Valley is to be eliminated.

The predictive power of visual perception is just one of the components that make up human vision, and robots of the future will require an analogous way of visual perception, even if they already have the advantage of electrical transmission via copper wires or fiber optics being millions of times faster than signals travelling through biological cells.

Making robots more human will inevitably mean creating systems that know and anticipate our moves, even in something as simple as a childhood game.