Tired of feeling boxed in by your game console? Then rush over to Kickstarter and get ready to throw your money at the screen. Ouya (pronounced “ooo-yah!”), the widely publicized new platform, is an open game console built on Android that supports free-to-play games and is getting close to completing its campaign to take its prototype to production scale.

For only $99, backers will receive their own Ouya console and one controller scheduled to be delivered in April of next year.

Less than three days remain in the record-breaking project and backers have raised close to $7 million to disrupt the game console market. Kickstarter reports that Ouya raised $1 million in less than 9 hours (the “fastest to a million” award) and the “most earned in 24 hours” record of $2.5 million, knocking crowdfunded gaming’s poster child Double Fine out of top place.

[UPDATE: The Ouya Kickstarter has ended, and while it didn’t break Pebble’s record for most funded project with over $10 million funds provided, the game console came in second with $8.6 million raised. If you missed your chance, preorders of the console are available on Ouya’s new website for $109.]

Even before crossing the project’s finish line, Ouya has made deals to deliver content from live video streaming company Twitch TV, OnLive (delivering games like Final Fantasy), Clear Channel’s live streaming radio service iHeartRadio, and Vevo, which has had great success with delivering music videos on YouTube. Ouya even has its first exclusive gaming content, prequel episodes to Human Element from Robotoki.

It’ll even have Minecraft.

Perhaps you can see the appeal of the new console with their intriguing pitch:

Ouya is the brain child of Julie Uhrman, former VP at GameFly and IGN Entertainment, with a background in digital delivery and mobile strategies. With the design firm behind the $100 laptop and the Jambox developing the “perfect” controller for the platform, the company has convinced established game developers, like Brian Fargo of inXile games (the company behind the Wasteland 2 revamp, itself a hugely successful Kickstarter project), to give a thumbs up to the project.

Going open source means that instead of having an army of developers trying to control everything, anyone who wants to jump into game development will be able to. That potentially means a large library of games could become available, especially since the platform will require developers to offer at least part of the game for free.

The platform seems poised to make a system that hackers and console enthusiasts can sink their teeth into. But the question is, how many people are ready for an entirely new platform in the aging console space? Just over 63,000 by the end. That’s how many backers have signed up, and based on the tracking from the awesome site Kicktraq, over half of those interested signed up in the first few days:

[UPDATE: Over the final few days, Ouya saw an unprecedented 11,568 backers jump on board and an additional $1.7 million was raised, according to Kicktraq.]

Now while the number of backers doesn’t translate exactly into the number of consoles purchased — this is, after all, a campaign to move a prototype into full-scale production — it is a fairly small number of people comparatively. Consider the competition: according to Microsoft, 67 million Xbox 360 consoles have sold as of May, and that was before the company offered the console for $99 with a 2-year subscription, which has managed to keep it as the top sold console for 18 months straight. And next gen “Xbox 720” is supposedly to be released next year, which could extend Microsoft’s domination of the market.

Even as the Xbox has expanded beyond gaming to become a digital content delivery device, the company that may be in the best position to disrupt the game console market is Apple with Apple TV, which recently added Hulu Plus to offer yet another alternative to Netflix and its own content through iTunes. In fact, 1.3 million Apple TVs were sold worldwide last quarter compared to the 1.1 million Xbox 360s sold. And while Nintendo pins their hopes on the WiiU, the tablet-sized controller that is to offer a 2nd-screen experience to the TV, Apple already has 2nd and 3rd screens in gamers hands…they’re called iPhones and iPads and they (almost) make game controllers obsolete. With Apple TV already connecting iTunes accounts to content ported through a TV, gaming through the device may be a casual announcement away as an app store for Apple TV seems inevitable.

For all the hype-generating descriptions in the video game space — like “revolutionary”, “breakthrough”, and “ground-breaking” — game consoles have been slow to innovate, with the most notable being motion sensing ushered in by the Wii in 2006 followed by the Kinect in 2010. It’s no secret that mobile gaming is perceived as the “console killer,” and that may be why the next Xbox and Playstation consoles exist only in Rumorville. And who can blame them? The rapid pace of technology means that “state of the art” is unimpressive only months (or less) after it hits the shelves.

In light of this and with mobile gaming skyrocketing, it would seem that Ouya is fated to get lost in the noise, even at its affordable price point. 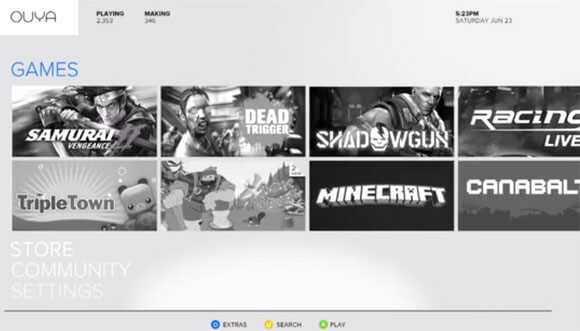 But that assumes that Ouya is even trying to compete in the same game that the big console makers are. Truth is that in the console race for better graphics, multiplayer everything, and sticking to a handful of IPs, an enormous amount of quality games have been left in the wake. Not only could Ouya become a hacker’s delight, it could also be a retro console gamer’s dream come true. Add in the surge in indie game development and successful mobile developers looking to crossover into consoles and Ouya starts to look very promising for developers and gamers alike.

An inexpensive platform with a motley crew community could be exactly what is needed for long term success in the gaming world. After all, it seems to have worked to help 3D printing take off.

As any gamer knows, it’ll come down to the look-and-feel of the console, both in how games look and what the controller feels like. Still, Ouya has its work cut out to make a dent in a fading console gaming market..and fast. Before the end of the decade, the game console may already be a museum piece.