If there’s any indication that people are looking for exercise motivators, consider the employment outlook for fitness trainers, which is expected to be 10 percent higher than other occupations in the coming years, according to the Bureau of Labor Statistics. Rather than spending $60 for a single session with an average trainer, one company has a high-tech solution to keep you focused on your exercise goals: spend that money on a wearable activity tracker that syncs with your smartphone or computer. 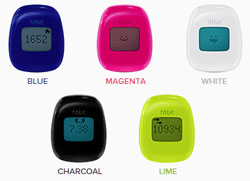 The Fitbit Zip is a small clipon that is an all-day step monitor. Inside the miniature device is an accelerometer to measure the number of steps you take, which it uses to calculate the total distance you’ve traveled. This information is also used to calculate the calories you’re burning, which can be weighed against dietary intake information that you enter on its online website.

Plus it uses a 3V-lithium coin battery so you don’t have to worry about recharging it (though you have to replace the battery in 4-6 months).

The Zip’s display gives a readout of your progress, and simply tapping the face of the device cycles through the information. Using either the USB dongle or a Bluetooth-compatible device, it wirelessly syncs with PCs, Macs, smartphones or tablets, allowing you to have near continual updates of your progress without even having to take it off. (As sexy as the syncing feature is, a Macworld review of the device has put out a strong call for a bug fix that prevents it from syncing properly with iPhones.)

Borrowing concepts that are successful in the gaming world, users are rewarded not only with visual displays of their progress, but badges are awarded for specific tasks, such as climbing a set number of steps or walking a certain distance. Additionally, Fitbit lets you connect with others users, so that you can compare progress or compete with friends or family. Data can also be exported to various exercise apps, such as Lose It! and MyFitnessPal.

One of the main draws of this device is how discreet it is. Users can wear it all day undetected, so they could clip on a magenta Zip and still maintain a professional appearance. Users can also check their progress online anytime for free. That’s right, there’s no membership fee to use Fitbit’s service.

A commercial for the Fitbit Zip has been released to show off its features:

Now, Fitbit isn’t new to the activity tracker world. Two years ago, the company introduced its first gadget, a $99 clipon (now called the Ultra) and wristband, that tracks both activity and sleep. Since that time, the company has raised $9 million in Series B funding and earlier this year, another $12 million in Series C. Last June, Entrepreneur talked with CEO and Founder James Park. Park wouldn’t reveal any sales numbers, but states that Fitbit has tripled in size in 2011 and the expectation was to do the same in 2012. Furthermore, Park said that users of Fitbit have walked more than 80 million steps since the company’s launch in 2007.

So, does the company’s approach work? Hard to tell, but the company’s website claims that Fitbit users average 43 percent more steps per day than average. On some level, that is translating into improved fitness.

To be sure, the Fitbit Zip is a polished follow-up to the company’s initial offerings, one in which things get smaller, sexier, and play nicer with others. This is the trend that is sure to follow for activity trackers in general, as evidenced by Nike FuelBand and the Jawbone UP wristband. And more apps for smartphones are aiming at the Health 2.0 market, one that seeks to have a continuous monitor of physical health.

But just like weight training equipment, stair climbers, or made-for-TV exercise scams, an individual’s fitness cannot be completely relegated to a machine (at least not at this time). That means that companies who are in this market must incentivize fitness, which is not exactly an easy thing to do. It makes sense, then, why the Fitbit Zip is cute and colorful, yet employs gamification and competitive play as well as a variety of feedback loops to get people motivated. At least those who are motivated by these kinds of things.

The company is banking on the Zip to encourage people to push a little bit harder and do the little things in hopes that they will collectively add up to one big thing: meeting self-chosen fitness goals.

Certainly, the Fitbit Zip represents progress in the body monitoring movement. Still having only step counting but no sleep monitoring, as the Zip’s predecessors do, it’s questionable how much consumers want what could be perceived as a spruced up pedometer. But Fitibit has positioned itself smartly — working out the tech to make syncing automatic and effortless is an important problem to get working right now, so that more body monitoring information can be incorporated in stride.

Overall, the Fitbit Zip is a cool followup gadget to its exciting entry two years ago. It certainly reflects that the company is learning who its userbase is and providing a product that it’ll adore.

Perhaps in two more years, the Zip will become even smaller so that it could be embedded in a clipon earring or tie, for those who want to lose weight and feel like a secret agent.