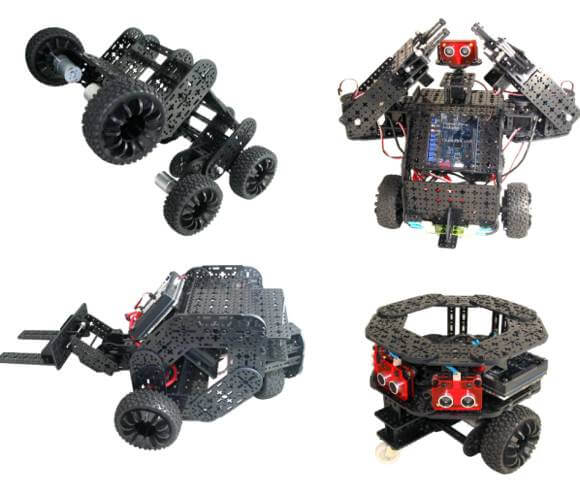 They were educators frustrated by the lack of flexible, easily accessible tools for teaching robotics. So they created the Multiplo Robot Building Kit, an open source robot building system meant to help people “learn by doing.” And, based on the success of their Kickstarter campaign, it looks as though the hackers are ready. They reached their original goal of $15,000 in just two days and, by the campaign’s end, raised over $132,000.

The kit comes with everything you need to build your own robot. They say it takes only about 45 minutes to assemble a robot. No specialized knowledge or soldering required, as the pieces – servos, plates, arms, sensors, control unit – are made to fit easily together. The controller is called DuinoBot and is compatible with the Arduino microcomputer that handles motor outputs and connects to sensors. And people with the knowhow can use Arduino IDE to give their robots more advanced functions. The robots are controlled with a TV remote. It also comes with simple graphics-based software – also the product of a successful Kickstarter campaign – that beginners can use to program commands. A major priority in creating Multiplo was its simple, open source hardware. To “learn by doing,” builders are encouraged to reproduce the parts and eventually start coming up with their own designs. The Kickstarter campaign has ended and contributors start receiving their kits February 2013.

Initially the team that includes a teacher, two engineers and a robotics specialist wanted to prototype robots. They soon realized that the tools they were using could and should be shared with others. As mentioned in the video, “There are some other options out there. Big corporations with copyright protection ensures that learning robotics is only for the elite.” So yes, they’ve obviously been frustrated DIYers in search of simple, affordable, open source robotics. Lucky for us, they decided to make it themselves.