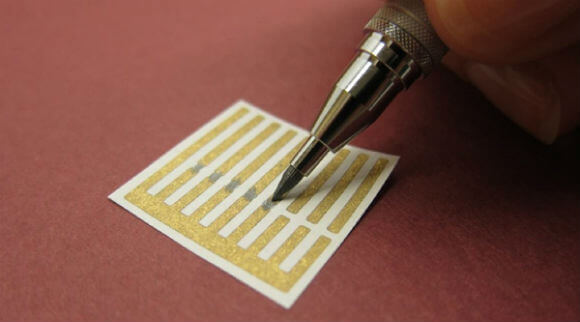 Here’s something you may not realize: the graphite in inexpensive pencil lead has the same chemical composition as carbon nanotubes, considered a “Golden Child” of futuristic materials because they make highly sensitive sensors. Now, MIT researchers have made their own pencil lead consisting of carbon nanotube powder, allowing fabrication of functional sensors to be literally drawn on paper.

As the saying goes, it really doesn’t get any better than this.

Previous methodologies for making sensors involved dissolving the nanotubes in dichlorobenzene, which is an organic solvent that is labeled a carcinogen and an environmental hazard. The new approach requires no solvent as the carbon nanotube powder is simply pressed into the form of a pencil lead and loaded into a standard mechanical pencil.

Now graphite consists of carbon networks in sheets whereas in nanotubes…you guessed it, they’re in tubes. Those tube structures allow electrons to flow along with minimal hindrance, until something sticks to the surface and disrupts the flow.

To test whether inscribed nanotubes can still act as a sensor, the researchers created thin gold electrodes on paper that were bridged by coloring in the gap with the pencil. Electron flow across this carbon nanotube bridge was altered when small amounts of ammonia was present, indicating that the ammonia molecules had bound to the nanotubes and increased their resistance. Further testing revealed that smooth paper works better and that there was good tolerance in the nonuniformity of the markings.

The current research was presented in an article titled “Mechanical Drawing of Gas Sensors on Paper” and published in Angewandte Chemie International Edition (unfortunately, the article is behind a paywall, but you can read the abstract here). As an indicator of the broad applicability of this research, the funding for this project came from the Army Research Office and post-doc Katherine Mirica, who headed up the project, was on a NIH fellowship. Mirica describes her work in the following video:

In a way, it’s an idea so simple, it’s a bit of a surprise that is hasn’t been done already.

Carbon nanotubes have been on the radar for the last two decades since they were first identified in graphite soot from an arc discharge, but they quickly captured the attention of scientists thinking about future technologies. Everything from nanoscale wires to space elevators have been proposed for their potential use down the road, but one application that has already proven quite useful is using them as sensors.

Because even a small amount of substrate can change a nanotube’s properties, scientists have been busy finding all sorts of things they can detect with nanotubes. One application that recently made the news came thanks to 15-year-old Jack Andraka, who developed a cancer biomarker sensor with nanotubes that won him the 2012 Intel Science Fair.

So it makes sense that researchers would be on the lookout for rapid ways to fabricate sensors, and drawing them fits the bill.

The work was carried out in the lab of Professor Timothy Swager, who is famed for the development of fluorescent polymers that act as chemical noses to detect trace amounts of explosives. Now known as the commercial Fido explosives detector, these sensors are equipped on iRobot Packbots and handheld devices used for landmine detection in Iraq and Afghanistan. Chemical detection is increasingly becoming big business, and sensors that detect trace chemicals are in demand, so it makes sense that Professor Swager is interested in new methodologies for constructing sensors, even if drawing them would only be helpful in the prototype stage.

So why hasn’t this idea been pursued before? Two factors may have played a big part in the feasibility of attempting this previously. First, the cost of carbon nanotubes has become significantly cheaper in the last few years as methods for generating large amounts of nanotubes have been developed.

Second, part of the focus of nanotube research has been utilizing discrete structures, meaning that only single-walled nanotubes of certain lengths, or multiple nanotubes in spatial alignment were being utilized for applications. The present research takes a messier approach by using large amounts of nanotubes in random orientations to inscribe a bridge between two gold electrodes. As the experiments showed, that turned out to work just fine.

Future plans with this technology include broadening the range of nanotubes that can be pressed into pencil lead in order to expand the range of substrates that can be sensed. A possible application is to create sensors that detect ethylene, which is a commercial measure of the ripeness of fruit.

Carbon nanotubes are sure to play some kind of role in the future, though it is uncertain exactly to what extent. Fortunately, refined methods for their synthesis and separation have enabled them to be made commercially available and cheaper every year. That will only help more innovation and research find new ways of using nanotubes to create next generation technologies.