Times, they are a changin’.

I think when Bob Dylan penned the lyrics to his timeless song he had no clue that Hatsune Miku was coming. She continues to dance and sing her way into the hearts of thousands of fans as they pump their glow sticks and sing along, not deterred in the least by the fact that their literally radiant entertainer isn’t real. Hatsune Miku recently performed her “Mikupa” concert in Hong Kong (Oct. 2) and Taipei, Taiwan (Oct. 6). The tireless pop star held two concerts each day. The concerts represent the third trip abroad for the diva after performing to sold out crowds in Los Angeles (which Singularity Hub attended and covered) and Singapore last year. 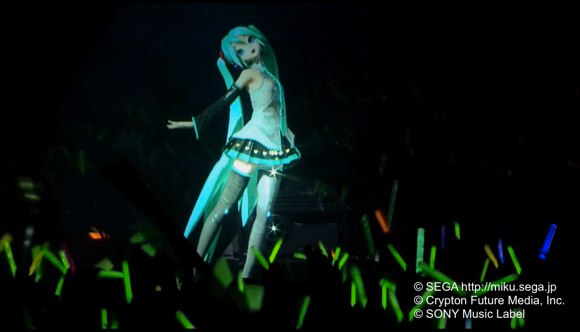 If you’re still a little slow to the virtual pop star scene, Hatsune is the creation of the Japanese music technology company Crypton Future Media. Everything about her is artificial, from the energetic stage hologram to her singing voice, which is powered by Vocaloid software from Yamaha.

Nothing says technological progress like a virtual star that outshines its human competitors. When her song, “Tell Your World” was released this past January it ranked even higher than songs from AKB48, the all girl Japanese sensation. The song set a record on YouTube with over 2,000,000 plays.

The following is footage from the Taiwan show. Hit play and start bobbing along with the crowd. And don’t forget your glow stick!