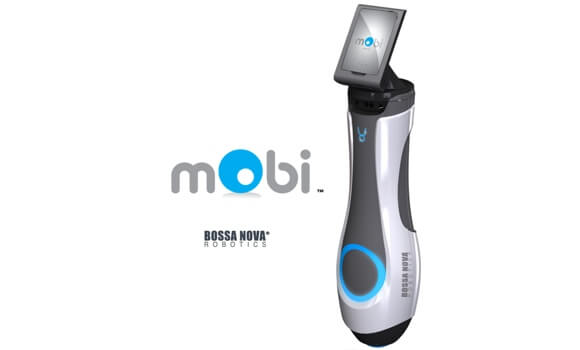 Tell me if you’ve heard this one before: robots are taking over the workplace. Okay, but right now I’m not talking about automation putting factory workers, cooks and lawyers out of the job. Because these robots aren’t meant to replace, they’re meant to be us.

Yet another telepresence robot has made its debut on an already crowded field. Meet mObi. mObi is familiar in some ways. Like iRobot’s AVA and Double from Double Robotics, and the Ctrl Works’ Telepresence Puppet, and – well, like just about all the other telepresence robots mObi is basically a mobile base with an iPad for a head. One look at mObi, however, and it’s plain to see that this robot has got some serious style so often lacking in those other office/hospital/nursing home telepresence hopefuls. Its sleek, colorful exterior means you know you’ll look good as you “show up” at that meeting, despite actually sitting on your couch in pajamas. And speaking of getting around, its ballbot locomotion is the coolest set of wheels I’ve seen on a telepresence robot. PrimeSense 3D sensors help it to avoid walls and distracted colleagues, and its Human-Robot Interaction application helps it to tell those distracted colleagues to “Look out!” – but in a nice, efficient manner.

mObi is the creation of Bossa Nova Robotics, launched from Carnegie Mellon University’s Robotics Institute in 2005. The robot made a big – albeit slow and clumsy (it had to be manually guided by a very patient human) – entrance at RoboBusiness 2012. Instead of making a robot specifically to aid doctors like the Puppet or to help the elderly like AVA, mObi is a general-purpose platform that can be configured to the user’s needs.

Given its good looks, its lack of swagger at the conference was a bit of a letdown. The ballbot locomotion had apparently created some stability issues in the past. As you’ll see in the following video, they came up with a solution that’s suitably nifty for mObi.

So many prototypes, so much money to spend on telepresence robots.

Competition will continue to intensify as one company after another continue to roll out their best platforms that will allow you to stay home and still get the job done. Which one(s) will be the first to break big into the market is anybody’s guess. It still remains to be seen that these robots will be worth their cost. Will they prove to be invaluable tools that corporations and hospitals can’t do without, or will they turn out to be more trouble than their worth?