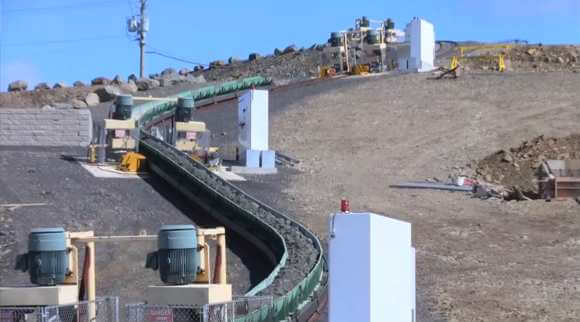 As the 33 Chilean miners, trapped for two months beneath ground in 2010, reminded us, mining is dangerous business. And other factors, such as labor shortages and deposits that are increasingly harder to get to, also make the old school industry ripe for a twenty-first century overhaul. Several mining companies are now taking steps to take humans out of harm’s way and put robots in their place.

Built by Rail-Veyor Technologies Global, Inc., the so-called “rail-veyor” combines train, conveyor, and truck hauling features into a single system. Deep beneath the surface a machine loads train cars with ore. The automated train then travels through tunnels back to the surface – no humans needed. Operators only control the system from the surface. Without the need to provide human workspace, the tunnels are much smaller than normal mine tunnels. And the train cars have a half cylinder shape, requiring much less space than a truck carrying an equivalent load. The cars don’t propel themselves but are pushed along the track by electrical drive stations with horizontal wheels that turn against the sides of the cars. And multiple trains can operate on the same track as they move in a coordinated manner to avoid collisions and traffic jams. Exiting the mine, the trains turn into conveyor belts, hugging the light rail and inverting at the end to dump material. Then it’s back into the mine for another load.

Check out rail-veyor in the following video.

Part of the drive behind developing automated rail in mines is the fact that large, easily accessible deposits are becoming harder to find. Valuable deposits are increasingly found only in remote areas of the world or locations hundreds of meters deep that are expensive and dangerous to reach. On top of that, the number of skilled miners is expected to decrease as baby-boomers continue to retire, creating a labor shortage. As the director of the Centre for Environmental Research in Minerals, Metals and Materials, John Meech told MSN Money, the situation is desperate: “One of the biggest problems that the mining industry faces worldwide is trained personnel. We can’t get them. One of the ways we are going to have to deal with that is to automate the systems so that the human becomes the supervisor, rather than the direct means of control.” These factors are driving up mining costs and forcing companies to find cheaper, more efficient ways to mine.

The world’s second largest iron supplier, Rio Tinto, is also building a ‘Mine of the Future’ at their Pilbar, Australia location. They’re working with the University of Sydney’s Australian Centre For Field Robotics to build a fleet of robotic trucks and trains to haul ore autonomously. The vehicles will be equipped with high-precision GPS and with AI, the vehicles will learn the layout of the mine, avoid collisions with other vehicles and obstacles, and choose efficient routes and save on time and gas. Rio is also building an autonomous drilling platform that’s already being used to bore tunnels for subways and sewers. Drilling instead of blasting through the rock is expected to increase progress through the rock four-fold to 20 meters per day. As with rail-veyor, the system will be controlled remotely from their operations center in Perth hundreds of kilometers away.

Similar to the way it’s changing the way farmers farm, robotics seems on the verge of transforming mining practices that have remained largely unchanged over the past 30 years. Certainly the encroaching automation will be met with resistance by some, but if the safety and economic benefits turn out as hoped, it will be one train that no one can stop.