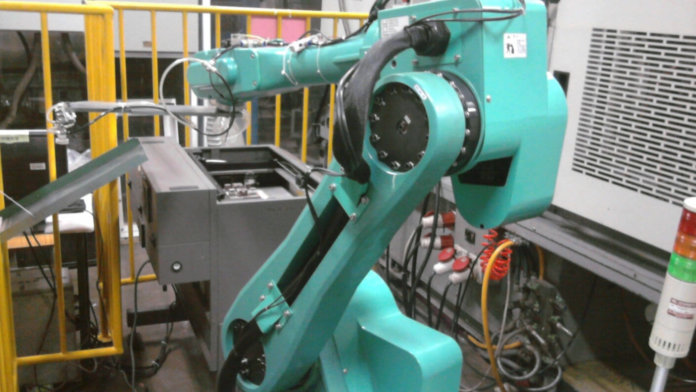 Foxconn, the Chinese electronics manufacturer that builds numerous mobile devices and gaming consoles, has been in the media lately because of labor issues, complaints over working conditions, rumored riots, and even suicides, all occurring in the past few years as demand for smartphones and tablets is skyrocketing.

While consumers began to complain in response to media coverage over working conditions, prompting Apple to hire an audit of the factories, Foxconn’s President Terry Gou had another idea for dealing with labor concerns: replace people with robots. In fact, last year Gou said that the company would be aiming to replace 1 million Foxconn workers with robots within 3 years.

It appears as if Gou has started the ball in motion. Since the announcement, a first batch of 10,000 robots — aptly named Foxbots — appear to have made its way into at least one factory, and by the end of 2012, another 20,000 more will be installed.

Though little is really known about these new bots, the rate of robot installation thus far is much lower than Gou’s original claim; however, the evidence suggests that it is difficult to know exactly what is going on in the factories and what is coming down the pipe. On top of that, these robots are manufactured in house, meaning that little information about them needs to be shared with the outside world in marketing reports, for example.

The FoxBots that have been installed apparently are designed for simple, yet precise repetitive actions common for simple manufacturing robots (lifting, selecting, placement). When it comes to automated factories, robots that can perform these tasks aren’t really anything new. But one look at the photo of the robot and it’s clear this isn’t just a simple machine, but a similar type of robotic arm to those used in assembly lines of automotive manufacturers.

That means more sophistication might be possible with these bots alone or in tandem.

As part of the investigation into conditions inside the factory, a few camera crews have been given access. As we reported back in April, you can see for yourself what conditions appear to be like:

According to a translated page from the Chinese site Techweb, each robot costs between $20,000 to $25,000, which is over three times the average salary of one worker. However, amid international pressure, Foxconn continues to increase worker salaries with a 25 percent bump occurring earlier this year.

It’s worth noting that you can see automation is already part of the manufacturing process at Foxconn, but the new Foxbots are aimed to not merely complement factor workers, but replace them. As the world’s largest manufacturer of electronics, this move wouldn’t be happening unless the robots were ultimately cheaper than human beings.

If Foxconn ramps up the robot rollout, it’ll be interesting to see what the worldwide response is. While there are those who worry that the rise of robots will bring about the end of work as we know it, others see the Foxconn working conditions as violating human rights, and therefore, might welcome robotic replacements, if it means that conditions for the remaining human workforce could improve.

Because Foxconn employs 1.2 million workers, robot replacements both solve worker problems and create them. It should come as no surprise then that many manufacturers are watching the situation at the company closely.

It would be too easy to criticize Foxconn for a move like this, but the company is not alone — Canon reportedly aims to do the same thing.

An important statistic from the International Federation of Robotics is that the number of operational robots in China increased by 42 percent from 2010 to 2011 (close to 75,000 robots), an unprecedented growth in the 50-year history of robots. At that rate of adoption, it would be 2019 before there were 1 million robots in all of China, but odds are that the use of robots is only going to increase as the pendulum that led to the economic boom in China swings back in the other direction.

In the end, we all know that the future of manufacturing is all about robots. It’s a question now of how fast the transition will occur and whether governments, businesses, and organizations will be able to adjust with the shifting workforce and economies.

During this time of flux, many are looking for leaders to take the lead. Whether Foxconn proves it can correct its current problems with robots or digs an even deeper hole by its displacement of a large workforce will play out in the immediate future.

Regardless, it means bots are here to stay.