Doctors Use Brain Scanner To Communicate With ‘Vegetative’ Patient 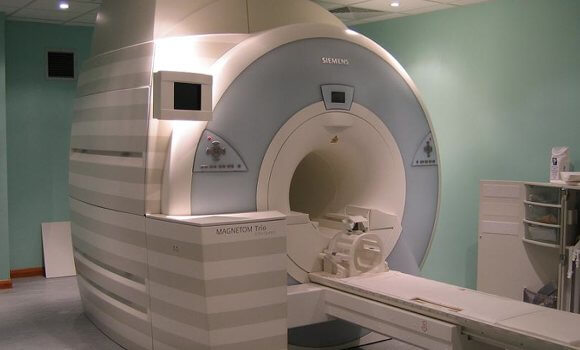 Contrary to what was previously thought, some people in a vegetative state may not be unaware of their surroundings. Brain scans recently showed one patient able to answer yes-or-no questions.  Researchers would ask the patient questions, and then monitor a scan of his brain for a yes or no response.  This technique will not only identify the small percentage of vegetative patients that are aware, but also reconnect them with their care givers and with their loved ones.

A vegetative state is a condition in which a person comes out of a coma, is awake, but is not aware of their surroundings, bodily sensations, is not able to follow or understand speech. Nor can they have any thoughts, emotions or memories. But while the injury prevents them from having any kind of higher brain function they are still able to exhibit basic functions such as breathing and sleeping and waking at regular times, and they can even exhibit some reflexive behaviors that might be mistaken to indicate awareness such as squeezing a person’s hand or even smiling.

At least that’s the definition of vegetative state today.

After being in a vegetative state for more than a decade, Scott Routley, 39, communicated to doctors for the first time – through signals from a functional magnetic resonance imaging (fMRI) machine. Routley’s parents had previously claimed that he’d been able to communicate with them by moving his thumb or his eyes, but the medical staff hadn’t accepted those claims. Routley was involved in a study published in 2010 in which fMRI was used to assess the brain states of 54 patients with consciousness disorders. The patients were asked to perform two imagery tasks while in the MRI scanner. In one task they were instructed to imagine themselves on a tennis court hitting the ball back and forth to an instructor. For the second task they were asked to imagine themselves traveling the streets of a familiar city or the confines of their own home, visualizing all they could see along the way. Because the different natures of the two tasks – one visualized body movement, the other spatial movement – different parts of the brain were activated when each was performed. That allowed the researchers to focus their attention on two separate parts of the brain. Then they told the patients to use the different types of imagery to answer yes-or-no questions. For example, “Do you have any brothers?” would be answered “yes” with the motor imagery on the tennis court or “no” with the spatial imagery of exploring their home.

Of the 54 patients, only 5 were able to modulate their brain activity willfully, as far as the fRMI scans could detect. Clinical assessments of these patients showed that 3 of them showed signs of awareness. Of the remaining two that were then deemed in a vegetative state, only one could reliably answer yes or no.

But that one, Scott Routley, is a game changer according to Prof. Adrian Owen, a neuroscientist at the Brain and Mind Institute at the University of Western Ontario and leader of the team caring for Routley. For one, he thinks that medical textbooks need to be rewritten. Clinical assessment of the conscious state needs to be revised so that the small percentage of people in the vegetative state who are aware can be detected. Identifying these people and communicating with them, clinicians could provide more tailored care. As Owen told the BBC, “Asking a patient something important to them has been our aim for many years. In the future we could ask what we could do to improve their quality of life. It could be simple things like the entertainment we provide or the times of day they are washed and fed.”

Simple yes’s and no’s could also be a means by which patients could connect with loved ones who had perhaps lived for years without knowing that the patient was actually hearing and comprehending everything they’d been telling them. When asked by doctors if he was in pain, Routley answered that he wasn’t.

Others have turned to brain scans in an effort to break through to people rendered noncommunicative due to brain damage. Bettina Sorger’s group at Maastricht University in the Netherlands have used fMRI to translate mental-imagery tasks to produce the 26 letters of the English alphabet and the spaces between words as well. Still in its early stages, the system was tested on just 6 healthy individuals. The results were promising however, as, only after an hour, the participants were able to spell out answers to open questions.

Speaking of game changers. Imagine if someone like Scott Routley, unable to communicate with his family and close friends since his accident, could once again be able to have entire conversations. Now, fMRI is neither convenient nor cheap as a translator. But proof of principle could spur development of something more feasible, and those who have been silent for so long would finally have a voice.