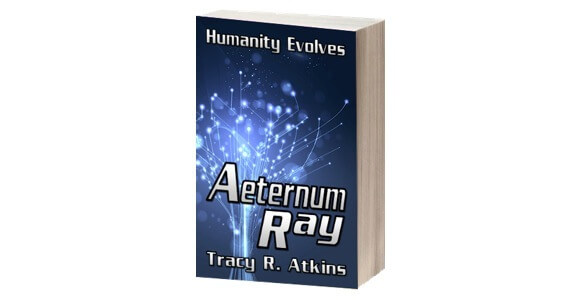 Tracy Atkins has seen the future, and wants us all to know that we should feel pretty good about it.

His just released book, Aeternum Ray, is a formidable sweep of all the major technological advances that have got us to where we are today, and an educated guess as to where we’ll be in the future – 204 years from now, to be exact. With a career in IT, Singularity Hub member Tracy Atkins is someone who not only has been passionate about technology his entire life, but he’s been an active participant. By fifteen he had already written and sold software and, years before the internet, run a bulletin board system connecting the residents of his small hometown of Madison, West Virginia.

Aeternum Ray is a collection of letters written by William Samuel Babington to his son Benjamin. But you can think of William as a resident of the year 2216 sending messages to the world of 2012 about what life will be like 10, 50, 200 years from now. Of course, it wouldn’t be a singularity book if artificial intelligence didn’t factor big. Like Kurzweil, he places the technological singularity – when AI matches human intelligence and promptly leaves it in the dust – around 2050. But that was Atkins’ own projection, the timeline he’d come up with based on his own research. He told me that he didn’t read Kurzweil’s The Singularity Is Near until after writing the book.

Why should we feel good about the future? The prominent AI in Atkins’ book, a robot named Ray, tells us so on December 31, 2049. He tells us that he’s here to solve all of humanity’s problems, to cure all diseases, to wipeout hunger and poverty. He does this, but later in the book we find out that even seemingly unlimited intelligence can’t solve all of our problems. Ray changes our technology overnight, meanwhile, we stubbornly remain human.

Aeternum Ray is a marked contrast to the numerous future depictions in popular media in which AI turns out to be the bane, rather than boon, of our existence. Atkins doesn’t buy into Terminator. “There’s a lot of talk about existential risk, AIs becoming evil or bad. There’s a lot of talk about AIs becoming uninterested in humanity altogether. But if you look at the optimistic view that we’re going to build AIs that are helpful and are going to take an interest in humanity…that’s the ultimate goal and I think that future is more likely.”

Aside from selling more tickets at the box office, Atkins thinks our penchant to create a doomsday future is human nature. “I think a lot of the negativity comes from self-reflection. It’s easy to point out all the flaws we have in ourselves, and we seem to want to transpose those onto our artificial intelligence creations. I wanted to craft, not necessarily a best case scenario even but, say, an optimistic and hopeful look toward the future.”

Aeternum Ray (‘aeternum’ derives from the Latin word for eternity) has all the fixings of a good singularitarian book: AI, exponential progress, virtual realities, downloading minds into computers. Atkins is passionate about technology and the singularity and he wanted to write a book that appeals to people like himself and to others who, for whatever odd reason, don’t read websites like Singularity Hub.

“I don’t think the public has a good grasp about what’s just about ready to happen. Augmented reality, virtual reality, artificial intelligence, all of these things are happening rapidly. There are thousands of academics working on this. And then you’ve got a small community of people that are interested in the singularity, maybe three million worldwide. You look at 99.97 percent of the population, they haven’t got a clue.”