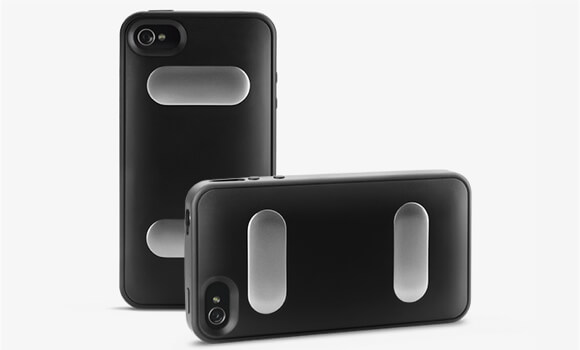 Technological innovation and the ubiquity of smartphones continue to combine to enable diagnostics outside of the traditional healthcare setting. AliveCor is an electrocardiogram monitor that attaches to your iPhone and can take readings of your heart and send it to your cardiologist. It just received approval from the FDA and could be prescribed by doctors in the next few months.

Electrocardiograms, or ECGs, are used routinely to monitor a person’s heart health. This normally involves a series of electrodes attached to the chest, arms and legs. These electrodes track heart rate to detect any irregularities in heart rhythm, and measure the manner in which the electrical activity spreads across the heart. AliveCor has two leads right on a case that snaps onto the iPhone. Fingers of both hands touch the leads and heart rate is measured. The data, transmitted wirelessly to the iPhone, is analyzed by an app called AliveECG and stored on the company cloud. The data can be accessed at AliveCor.com and be sent to a cardiologist.

The company began developing AliveCor in 2008. The FDA approval is obviously a major milestone in their efforts to the company’s mobile health aspirations. AliveCor is not yet available for patients and consumers but it will be in the future. More information will be available in January on a release. In the meantime, the device is available to doctors who can go to the company website, enter in their license information, and order an AliveCor for $199 which they can prescribe to their patients. When available, the device is expected to be cheaper for consumers, around $99 each.

The heart monitor was invented by David Albert, a cardiologist from Okalahoma and an AliveCor founder. It is an easy way to detect cardiac arrhythmias or atrial fibrillations, anywhere, anytime. This is particularly useful for high risk patients such as those who had recently had heart surgery. Remote detection and notification could mean the difference between life and death. Paramedics and EMTs can also benefit from having very portable ECG capabilities. And a device like AliveCor could also bring routine heart monitoring to remote and poor regions of the world where an ECG monitor is too far or too expensive to use. The stage has already been set in places like Kenya where smartphones costing just $80 sold like hotcakes. The device also makes getting an ECG cheaper.

Other companies are striving to put remote health monitoring capabilities in the hands of patients. SHL Telemedicine’s Smartheart is a 12-lead ECG recorder that attaches to a smartphone and transmits via Bluetooth. French healthcare firm Withings has made regular blood pressure checkups easy with a blood pressure cuff that works with any device using iOS.

The next step for AliveCor is to make their device compatible with the latest iPhone and for devices run on Android as well. They’d also like to eventually release a “pad” version that can monitor heart activity sitting in the palm of a person’s hand. These could serve as kiosk stations were anyone could go to check their heart rates. These ‘next step’ modifications would require separate FDA approval, but approval for the basic system could make it easier to get additional approvals.

While the advent of mobile health devices is on the rise, the FDA’s ability to assess and approve these new devices lags behind. For the sake of heath professionals and those they care for, let’s hope AliveCor’s approval will be followed by many more in the not too distant future.