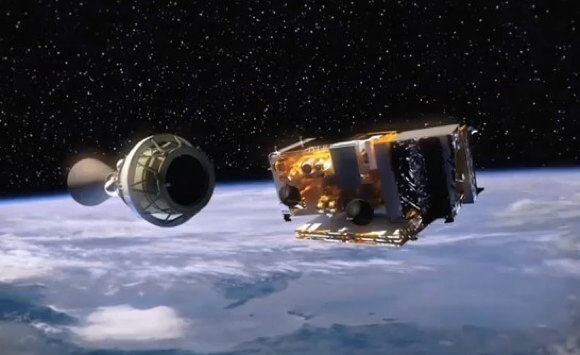 On October 4th, 1957, the Soviet Union launched Sputnik I, and with it, the space age. By today’s standards Sputnik wasn’t much of a satellite. It was the about the size of a beach ball, weighed under 200 lbs, and orbited for just 22 days, sending out its continual “beeps” that amateurs could hear on shortwave radios.

But those simple beeps reverberated across the world and are still being heard today.

In the half century since launching the world’s first artificial satellite humanity’s drive to put technology in orbit has only intensified. To date, thousands of satellites built by more than 50 countries have been launched. They’ve come in all shapes and sizes, been equipped with scanners to measure seemingly everything that can be measured. From weather patterns to vegetation cover to pollution, satellites provide us with a planetary awareness unique to our time. The following are just some examples of how far satellites have come since that October 1957 evening.

Probably most familiar to us is the weather imagery that satellites provide. In addition to helping forecasters forecast, no hurricane or typhoon goes undetected since the advent of satellite imagery. And decades long records can now be tapped by climate scientists to address critical questions about our climate and the long term affects of human activity.

Weather satellites, however, let us know much more than whether or not we’re going to need an umbrella. Let’s take an in-depth look at what one of NASA’s more special satellites can accomplish: the Suomi National Polar-orbiting Partnership spacecraft (NPP). Part of NASA’s Earth Orbiting System (EOS), NPP is one of a series of satellites providing an unparalleled view of the Earth’s clouds, oceans, vegetation, ice, and atmosphere.

Every day NPP orbits the Earth 14 times and scans nearly every square mile of the surface. Equipped with sensors to detect microwaves, which pass unhindered through cloud cover, it measures both temperature and amount of moisture in the atmosphere. An ozone detector also tracks changes in ozone layer coverage, extending a 25 year-plus measurement. Another instrument on NPP detects visible and infrared light to track both sea and lang surface temperatures, ocean color, and forest fires. The following is a time-lapse video of the change in ground water across the US over a decade.

From their distant vantage points satellites equip us with a way to see how happenings in one area of our small planet affect another. In May, the NPP tracked smoke generated by fires burning in Siberia. After six days, global winds had brought the smoke to American shores.

NPP’s data are used by marine biologists to track phytoplankton concentrations, particularly near coastlines, and by the government to warn against potentially harmful algae blooms in the Gulf of Mexico. And by simultaneously tracking vegetation land cover and weather, the NPP can offer an ongoing assessment of how rainfall levels affect forest and crop growth.

Weather and vegetation aren’t the only dynamic entities being tracked. Satellites also have an eye on Earth’s wildlife. Traditionally, tracking endangered species involves capture and tag methods that are extremely labor intensive, disruptive, and inefficient. But Quickbird, a privately owned satellite, makes tracking large animals a matter of high resolution photography from 280 miles above. The satellite has been “zoo” tested, correctly identifying different animals at the Bronx zoo. Conversation groups plan to use Quickbird to track endangered species including giraffes and elephants in Africa, elk and bison in Wyoming, and flamingos in South America.

Of course, satellites point their instrumentation elsewhere as well – and sometimes the results are astonishing. This past June the Solar Dynamics Observatory captured Venus in transit across the face of the sun.

In August, NASA launched the Radiation Belt Probes, two twin satellites that will study the charged particles caught in Earth’s magnetic field. The radiation belts, known as the Van Allen belts, are affected by solar storms and ejections of charged particles from the sun. We’re shielded from the belts here on Earth, but for orbiting satellites and space travelers, the belts pose a real risk.

The view from space isn’t always pretty. This summer three independent satellites captured a Greenland that was melting at an unprecedented rate. Normally, during the summer’s elevated temperatures about half of Greenland’s ice cover melts. But the continent went from 40 percent of thawed ice on July 8 to 97 percent on July 12! The data was so shocking, Son Nghiem of NASA’s Jet Propulsion Laboratory was incredulous: “This was so extraordinary that at first I questioned the result.”

Satellites have changed the way we view our planet, and the way we view ourselves. Images such as the first idyllic views from Earth as it hung above the moon’s horizon, or the indiscriminate pale blue dot taken from a distant Voyager and popularized by Sagan, have been powerful in expanding our sense of interconnectedness. Now, with the multitude of satellites in orbit bearing a bewildering array of sensors, that interconnectedness is ever more quantifiable.

With tomorrow’s technology, future satellites will make today’s look simple, deaf and dumb machines. First to go could be those inefficient chemical thrusters, replaced by ion propulsion. And their sensing resolution and coverage will only increase. We’ll not only track our planet in amazing detail, but other’s as well.