In 1996, Jan Scheuermann was diagnosed with spinocerebellar degeneration, a hereditary condition in which areas of the spinal cord and brain that control movement deteriorate. She gradually became quadriplegic, losing the use of her arms and legs. But researchers at the University of Pittsburgh’s Pitt School of Medicine sought to give Scheuermann control back, not of her own arm, but of a robotic arm she would control with her own thoughts.

The brain-computer interface (BCI) that surgeons implanted consisted of two quarter-inch arrays containing 96 electrode contacts. The arrays were placed on the surface of Scheuermann’s motor cortex – one over the area that is activated when she thinks about moving her hand, the other over the area activated when she thinks about moving her shoulder. The arrays are able to detect the electrical activity of underlying neurons and use the firing patterns to control a robotic arm. 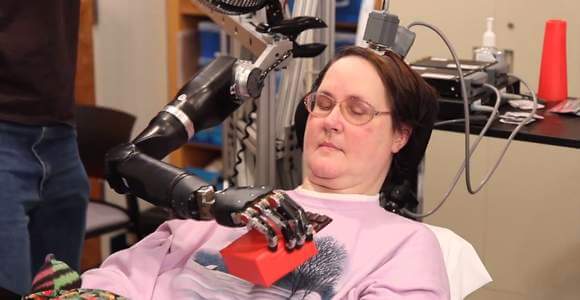 Scheuermann showed rapid progress during training. Within a week she was able to move the arm in and out, left and right, and up and down. Within a year of training she had become proficient enough at controlling the arm that she was able to feed herself a chocolate bar. The task had become relatively easy, she needed only to think of where she wanted the arm to go and it moved there, the researchers said, with the coordination, speed and skill comparable to an able-bodied person.

Taking a bite out of the chocolate bar was a moment of triumph for the research team and for Scheuermann, who remarked, “One small nibble for a woman, one giant bite for BCI,” as you’ll see in this touching video.

The study documenting Scheuermann’s progress was published in the December 17 issue of The Lancet.

The groundwork for brain-computer interfaces has been performed largely in non-human primates where researchers have successfully translated neuronal activity from the motor cortex into the manipulation of external devices including a robotic arm. And while it’s still early, it seems as though similar success might be expected with human BCIs.

Just this past May paraplegic Cathy Hutchinson used the BrainGate2 system from scientists at Brown University to control a robotic hand. Like Scheuermann’s BCI, the BrainGate2 translates neuronal activity in the motor cortex to control the hand – in Hutchinson’s case, to take a sip of coffee.

Last year researchers were able to use a temporary implant to “read” the minds of patients as they thought of specific words. The technology could one day enable people unable to talk to communicate.

About 250,000 people in the United States are at least partially paralyzed due to spinal cord injury. BCI-controlled robotic arms, Scheuermann’s doctors hope, will be available for widespread clinical use within the next 5 to 10 years. As we saw in the video, the technology’s already extremely impressive. But as the devices are fine-tuned in the coming years as they’re tested with more people, the movements will become increasingly natural and versatile, and we’ll hear more success stories like the ones Hutchinson and Scheuermann are telling today.