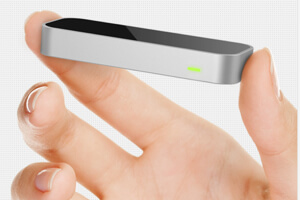 Mid-2012, Leap Motion unveiled the most accurate motion sensing technology on the market to date. The Leap detects every subtle finger flick and hand gesture with up to 1/100th of a millimeter precision and then translates it into a movement or command on your computer screen. All that for just $70.

A round of Minority Report and Prometheus references ensued—and then a round of skepticism. In June, Singularity Hub covered Leap Motion in depth, including a visit to the Leap Motion offices for a demo and interview with CEO, Michael Buckwald, and CTO, David Holz.

The sense is we may be on the cusp of a big change in the way we interact with our computers. Something as revolutionary as the mouse or touchscreen. But to the chagrin of many a tech fan, we won’t find out until Leap Motion’s flagship device, the Leap, ships sometime early this year.

So, until then, what else is there to say? Well, as it turns out, quite a lot.

At the end of 2012, Leap Motion entered a critical phase—application development. Cutting edge hardware and software are key. But a seamless, simple, mind blowing customer experience out of the box is equally crucial. And blowing minds will be a tall order without a quiver of Leap-enabled applications ready to go at launch.

For the inside scoop on app development and the Leap’s upcoming release, Singularity Hub contacted Michael Zagorsek, Vice President of Product Marketing at Leap Motion. Previously, as Director of Marketing Communications at Apple, Zagorsek shepherded Apple’s digital marketing team through the iPhone era. He signed up with Leap Motion in October, 2012.

Why Leap? Zagorsek says he asked himself what got him excited to work for Apple and found he was fired up about Leap for the same reasons.

“It was really about working with an organization making technology that allows people to do things they couldn’t before. [Apple] understood software, understood hardware, but fundamentally understood the user experience and how to create a device and an experience that transcended the technology itself.”

That’s no small statement. Zagorsek thinks the Leap device is potentially as pioneering as anything Apple. But the technology itself is only half the equation—and that’s what gets him up in the morning. “To be part of something that’s so new and to help grow it into something that achieves its full potential is just really, really exciting.”

To spur app development, Leap Motion shipped thousands of Leap devices to developers around the world in November—and they were just the ones who qualified for early development based on track record and clarity of ideas. Another 10,000 devices were shipped mid-December.

In all, forty thousand developers applied to the program, and Leap says they aim to eventually accept all applications. Overwhelming community interest? Check. But the developer program is also indicative of Leap values.

Zagorsek says, “We live and breathe the talent and potential of the developer community, and the more we can enable them to be brilliant and do things they could never do before, the more we’ll feel we’re being successful as an organization.”

To keep their finger on the pulse, Leap Motion started a “very humble but growing” YouTube channel where they’re collecting developer videos. There are already some pretty cool submissions. Here’s one of the earliest:

In the video, the LabVIEW hackers challenged each other to a 24-hour race to coolest Leap application. Pretty fast, right? Sure.

But when Singularity Hub spoke to Daniel Herrington and Milan Raj from the video, Raj admitted, “It may have been more like five [hours]. It was really quick. We were struggling to spread that out in the video…because we didn’t want to give somebody an incorrect illusion of how quickly you can develop it.”

The guys were impressed by the hardware too. According to Herrington, “There’s been a lot of talk on the internet about whether or not the videos they’ve put out have been a lot of smoke and mirrors. And they might be, but I mean, the device is really smooth. It works really well. Surprisingly well.”

Here’s a video by Bob Berkebile of a Leap-enabled app using Unity3D:

It’s early days yet. But two things stand out. First, developers are providing independent verification the technology is very precise. Second, the device appears to allow for rapid app development. And that bodes well for the 2013 release.

In parallel to application development, Leap is moving forward with production. The firm recently announced $30 million in Series B funding to scale manufacturing for the launch and a new partnership with ASUS that will bundle the Leap device with high-end notebooks and All-in-One (AiO) PCs later in the year.

Zagorsek says the developers were sent very early units so they could get to the business of developing apps. Meanwhile, the firm refined the design to produce a device that is “significantly smaller than the one [they] sent out to the developer community.”

The launch date is still early 2013—likely in February or March. But there’s a little flexibility there. “We wouldn’t let something like a few weeks get in the way of delivering what we think is an amazing experience.

Will the Leap live up to the hype? Impossible to say. What’s clear is folks really, really want it to. Zagorsek recalls, “One of the earliest indications that we really captured people’s imaginations wasn’t simply the volume of preorders that we got, but it was the 40+ thousand submissions for ideas.”

What will we use our hands to control in the future? Gaming, 3D design and modeling, music—or simply our computer desktop. Like a touchscreen minus the touch. But ideas like these are potentially only the first wave.