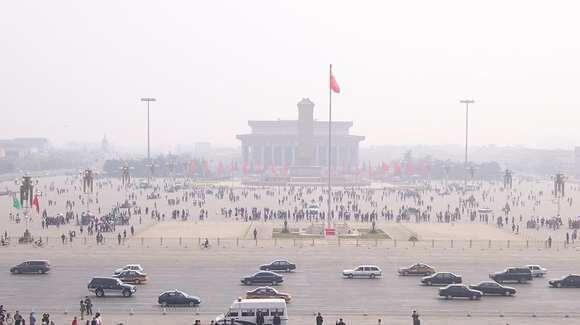 Industrialization has its price.

This past weekend Beijing, the epicenter of one of the world’s fastest growing and largest economies, reached the highest smog levels on record. The World Health Organization standard for air quality sets safe limits of airborne particulates at 20 micrograms per cubic meter. According to a report published Monday by the Chinese state news media, those particulates were recorded to be 600 micrograms per cubic meter on Sunday and, Saturday night, they reached a staggering 900! The air quality was so bad Beijing’s pollution monitoring center warned its residents to stay indoors.

This is what happens when a country’s industrial and technological advance outpace measures to safeguard their effects on the environment. Right now China produced 70 percent of the world’s iron and steel and about half of the world’s cement. And while car sales in the country have slowed considerably compared to the torrid pace of 2009 and 2010, China still remains the largest car market in the world.

All of that exhaust has to go somewhere.

According to Beijing’s Municipal Environmental Protection Bureau, the recent spike was caused by a low pressure system that trapped the pollutants and that the levels would decrease in two days. But rather than an unprecedented spike, the record breaking levels probably reflect the fact that a new kind of data was only recently made public.

Particulates less than 2.5 micrometers in diameter (PM2.5) are considered dangerous due to their ability to penetrate deep into the lungs. The bureau had previously released data on larger particles measuring under 10 micrometers in diameter (PM10). Only since this past December has the bureau been releasing the PM2.5 data. The year is still young. As the new data streams in Beijing’s residents can expect more record breaking days.

In addition to particulates, the bureau plans to monitor three other airborne hazards by the hour: sulfur dioxide, nitrogen dioxide and “inhaleable particles.”

Beijing’s murky skies made headlines in the run up to the 2008 Olympic Games as arriving athletes were photographed walking through the airport with face masks on and complained about the air quality. Perhaps in response to the damaging media coverage, the city launched an emergency plan to clean up Beijing’s air a week before the opening ceremony that included shutting down factories, stopping all construction projects and limiting the number of cars on the streets at the same time.

Four years later, growing dissent among China’s residents has put pollution at the top of the country’s issues. Media coverage about pollution has exploded and is even being allowed criticisms of government environmental policies. People’s Daily, one of China’s most widely read newspapers published an editorial Monday entitled “Beautiful China Starts With Healthy Breathing.” It said, “The seemingly never-ending haze and fog may blur our vision but makes us see extra clearly the urgency of pollution control and the urgency of the theory of building a socialist ecological civilization….”

Another Chinese news site, Global Times, points out that Beijing is just one of 30 cities under siege by dense smog and also took note of the outrage that is now pouring out online and in the media. The article argues that the sheer scale of China’s manufacturing makes it “impossible for China to be as clean as the West.” In a brazen call out of government’s failure to control air pollution, it declares that “the government cannot afford to make decisions for the society.” And, alluding to the historic lack of transparency by reporting PM10 levels instead of PM2.5, said the government “used to deal with the pollution information in a low-key way….” The article goes on to urge the government to separate science and politics, to be truthful and to allow people’s participation in solving the problem.

Given the rate of respiratory disease in China, it’s no wonder the people are demanding a solution. More than half of men in China smoke, the percentage of women that smoke is much less. Yet the incidence of chronic obstructive pulmonary disease (COPD) – the leading cause for which is smoking – among Chinese men and women is nearly the same. While it hasn’t been demonstrated, air pollution is a very strong candidate for the equalizer. Regardless, the haze now smothering Beijing and other cities has spurred a people to demand a solution from their government. And the toxins’ effects on the environment remain to be seen (measured?). There’s a lesson here about rapid industrialization the rest of the world should heed.

Progress, yes, but not at any cost.