In a December paper published in Nature’s preliminary research online publication, Scientific Reports, Stanford researchers announced a fabrication process that makes thin-film solar cell (TFSC) stickers. The resulting TFSCs are thinner and lighter than today’s solar panels. And according to the researchers these “peel-and-stick” solar cells can be stuck just about anywhere—no surface is too curvy or uneven. 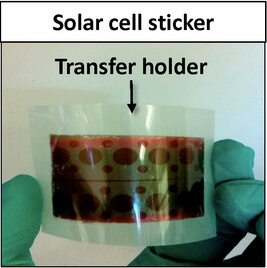 But the novelty of the new tech isn’t the flexibility. The solar industry is already making flexible TFSCs. Current manufacturing processes use a flexible substrate, like plastic, during fabrication. According to the team at Stanford, flexible substrates limit fabrication temperatures and chemical processing. The final product may be flexible, but it’s expensive to produce and lacks the efficiency of traditionally fabricated solar panels.

The Stanford group, led by Xiaolin Zheng, discovered a method for fabricating thin film solar cells on a rigid silicon wafer (as is traditionally done) with a layer of nickel on top (the breakthrough). After fabrication, with the aid of a water bath to coax the TFSC from the nickel/silicon wafer, the TFSC is peeled away. The fabrication wafer can be re-used to make more solar stickers.

According to the researchers, “The TFSCs after the peel-and-stick process show no visible damages. Next, the peeled-off TFSCs are attached to virtually any objects, including cell phone, business card, and building window…and these objects are previously inaccessible due to the incompatibility issues with the existing TFSC fabrication facilities.”

Zheng and company’s new process realizes the best of both worlds. They’ve managed to fabricate TFSCs that are thin, light, and flexible, without sacrificing the efficiency of traditional solar cells. Where could we use this technology? The better question may be, where couldn’t we? “The peel-and-stick process provides a simple way for integrating TFSCs into buildings, clothes, and many other nonconventional substrates.”

The sun bathes the Earth’s surface in huge amounts of energy every day. But not all the Earth’s surface is fit to be harvested by current solar panel technology. Significantly increasing where we can place solar cells, while maintaining previous levels of efficiency could be a sign of things to come. But it’s very early going yet. We’ll keep an eye on this one as it develops.