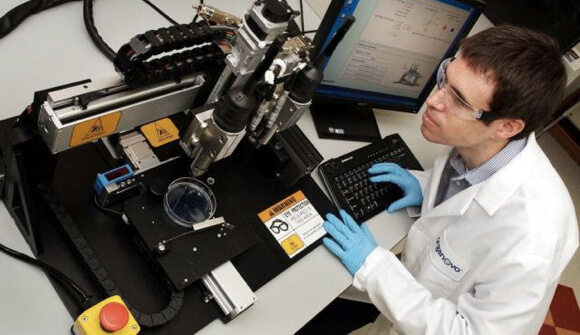 3D printing technology is hot and getting hotter. Whereas once 3D printers were limited to a few select materials, these days inputs include metal, plastic, glass, wood, and—human cells? Bet you didn’t see that coming. (Actually, if you’re a regular here, you probably did.) Bioprinting firm, Organovo, isn’t anywhere near 3D printing a hand or heart. But a recently announced partnership with 3D modeling software giant Autodesk (maker of AutoCAD) might speed things up a bit.

We first encountered Organovo in 2009. The firm introduced the NovoGen bioprinter in 2010—the first of its kind—and has since built ten more. At a cost in the hundreds of thousands of dollars and with, as yet, only rudimentary capability, bioprinting technology is firmly in the developmental stages.

Already bioprinters are capable of printing small parts, like arteries or knee cartilage. And in the near term, the most likely use is in drug testing—an $11 billion market in itself.

But eventually (years from now) researchers hope to print, not just the piston, but the entire engine—a new heart or lung—customized and made entirely from a patient’s own tissue, limiting the probability of rejection by the body and doing away with long and uncertain waiting periods for donors.

Until now, however, one of the biggest limitations to bioprinting wasn’t the hardware. It was the software. Just last September, in the Wall Street Journal, Hod Lipson of Cornell’s Creative Machines Lab noted, “We have machines that can make almost anything, but we don’t have the design tools. In bioprinting, there’s no computer-aided design software for body parts.”

That’s where Autodesk comes in. The design firm practically owns the 3D modeling market. Their software is near ubiquitous in any profession that builds things. Now, they’re moving from dead designs into the land of the living.

Wired recently described bioprinting design software as a DOS-like dinosaur—not exactly suited for your typical biologist or researcher whose specialty is necessarily not writing code. From that perspective, a partnership with Autodesk can only bring good things for Organovo and bioprinting at large.

Autodesk’s 123D design suite for non-professionals and AutoCAD for professionals are powerful, relatively easy to learn, and can already be paired with a home or third-party 3D printer. 123D Catch can even build printable 3D models using a series of pictures from your smart phone. One imagines that technology might one day translate body imaging (MRI, X-Ray, CT scan) into 3D models for bioprinting transplantable organs.

Printing a new liver on demand instead of waiting for a transplant is an exciting prospect—tech that could save many lives. But it is realistically still years away. Developing, de-bugging, and refining the software will be a lengthy process. And clinical trials in bioprinting are five or more years distant, never mind full approval for human use.