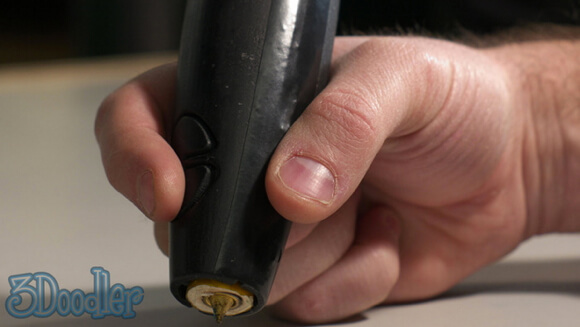 Five days after launch on Kickstarter, the 3Doodler 3D printing pen boasted over 21,000 backers and $1.9 million in pledges. Their goal was $30,000! What’s so special about the 3Doodler? If nothing else, it rivals the lofty infomercial marketing heights of Slap Chop or ShamWow. But let’s get something straight—3Doodler is a crafting “pen” not a handheld 3D printing pen (whatever that even means).

100% of what makes a 3D printer a 3D printer is that it’s guided by a computer, not a human hand. Calling 3Doodler a 3D printing pen is like calling a ballpoint an inkjet printing pen. But 3D printing is hot—why not make some bucks while you can? And in their own words, “Kickstarter is a funding platform for creative projects.” Good and bad, deserving or not—let the funders decide. And they have, to the tune of almost $2 million.

So what is this multi-million dollar idea? 3Doodler is a crafting tool, the unholy union of a hot glue gun and a particularly shapely marker. The doodler uses 3D printing plastics (yes, there’s your link to 3D printing) to draw plastic shapes on paper, stand them up and even combine them to form structures. The plastic sets up fast enough to draw squiggles in the air, and they’ll maintain their shape.

Even if 3Doodler isn’t exactly what it says it is—might it be fun? Sure. In the hands of an artist or crafter it might make something intriguing. 3Doodler’s creator, WobbleWorks, hired wire artists to make stencils and models for their campaign. And if wire art is your thing—here’s a way to make a plastic version.

3Doodler might add a little weight to arguments that crowd-funding sites like Kickstarter will become a hot-bed of fraud. But I’m not sure I’d go that far. 3Doodler is perfectly capable of providing their “3D printing pens” as promised. (As this guy shows, it’s not exactly rocket science.) And while anyone thinking this is some brilliant new use of 3D printing tech will be bitterly disappointed—I don’t think anyone actually does think that. (Please, tell me nobody thinks that.)

It would appear, Kickstarter sometimes attracts “investors” with a little too much time and money on their hands. This is the same market late night infomercials and home shopping television have long exploited.

For example, while the mid-level $50, $75, or $100 pledges probably aren’t terribly overpriced—a decent glue gun runs from $50 to $100—what about the $1,000 level that buys you (buys you!) the privilege of becoming a beta tester? And what does the lone $10,000 backer get? Stock? A cut of the profits? No. A hand-engraved 3Doodler. Lunch with the creators. Membership in an exclusive beta testing mailing list. Yikes.

3Doodler appears to be “an exercise in creative semantics,” and it’s a little stunning anyone would contribute more than the value of the item itself. But the numbers don’t lie—clearly there are more than a few folks itching to get their hands on one.