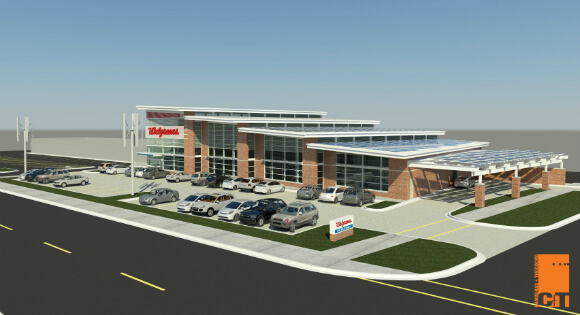 Could a large American retail store produce as much energy as it consumes? Walgreens is going all ‘green’ to find out.

The company recently announced a plan to erect a ‘net-zero’ energy store to replace an older one located in Evanston, Illinois. Through thoughtful and innovative design, the prototype store is specially designed to utilize various renewable energies technologies, such as wind, solar, and geothermal, in order to produce as much or potentially even more energy than it actually needs to operate.

Approved last fall by the city council, the plan uses a variety of strategies to achieve net-zero energy status drawn from energy-reducing measures from its own stores and numerous technology vendors.

Built using energy-efficient building materials, the store will implement energy efficient technologies, such as LED lighting and daylight harvesting, along with ultra high-efficiency refrigeration using carbon dioxide refrigerant. Engineers working with Walgreens believe that these efforts will reduce energy use by 40 percent. Furthermore, the store will generate its own energy through the use of two vertical wind turbines from Wing Power Energy in the parking lot, 800+ solar panels on the store’s tiered roof, and a geoexchange (geothermal) system that will tap 550 feet into the ground in order to maintain stable temperatures year round.

Other ‘green’ staples like bike racks/repair station and an electric vehicle charging station will also be installed at the store. For all these great features, the store will cost more to construct than a typical Walgreens store, but the company hopes to make up for that initial cost through energy savings.

Company engineers estimated that the annual energy usage for the store are 200,000 kilowatt hours consumed and 256,000 kilowatt hours produced. While it is intriguing to contemplate whether the store could actually have a surplus of energy up-for-grabs, it’s important to keep in mind that Evanston is located on Lake Michigan north of Chicago and can experience some harsh weather year round. Though Chicago’s reputation for being the Windy City holds promise for the wind turbines, the area has at least partly cloudy skies during 77 percent of the year, which doesn’t bode well for solar power. It is hoped that through the combination of these renewable energies that energy production needs will be sufficient.

As part of its green initiative that seeks to reduce energy usage by 20 percent at all 8,000 locations before the end of the decade, the store is scheduled to be completed by November of this year, which will make it the first net-zero energy retail store in the country, according to the press release. Once in operation, Walgreens has stated that it will seek LEED Platinum status form the U.S. Green Building Council, the most difficult designation to achieve.

Perhaps, the larger motive behind this endeavor is to use the store as a pilot plant for the implementation of these new technologies. In the press release, the VP of Facilities Development Thomas Connolly stated, “We are investing in developing a net-zero store so we can learn the best way to bring these features to our other stores.” This can only help the company learn energy savings practices that can translate to other locations as well as help in the design of future stores.

But once the store goes online, the big question will be can it generate more energy than it consumes? Walgreens will be actively monitoring energy usage for a full year before drawing any conclusions.

Other net-zero energy projects are also underway around the world, including an elementary school in New York City and a national stadium in Brazil that will be a venue for the 2014 World Cup. Like the Walgreens store, these projects will be analyzed thoroughly by companies interested in implementing their own green technologies to ensure that they can meet demand and actually lower operating costs.

The company has setup a Facebook page for its Net Zero Campaign for those who are interested in following along with the progress on the store.