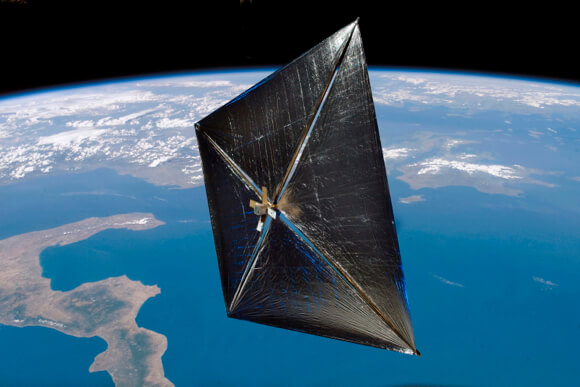 Navigating space isn’t easy—there’s no air, water, or earth to push your spacecraft in another direction. Rocket fuels and gravity assist have been our best tools for over fifty years. But in 2014, NASA hopes to launch a 13,000 square foot solar sail—the third to hit space and by far the biggest yet. It’s no warp drive, but solar sailing could send satellites into novel orbits or even to another star.

The sci-fi inspired mission, Sunjammer, is named after Arthur C. Clarke’s 1964 tale of sun-yacht races through the solar system and will carry the ashes of Star Trek creator Gene Roddenberry and his wife Majel Barrett Roddenberry to the mission’s destination, a gravitationally balanced orbit between the Earth and Sun (L1). See here for a video on the mission from NASA’s private partner, L‘Garde:

Sunjammer’s sail is a third of an acre, about 124 feet to a side, and seven times the size of the Japanese Aerospace Exploration Agency (JAXA) and Planetary Society’s solar sail IKAROS, the biggest sail successfully launched to date.

After deployment, the solar sail’s reflective surface will harvest momentum from sunlight—not unlike an ocean-going ship, only using photons instead of air.

The sail’s pulling power is proportional to its collecting surface area and drops off by the inverse square of its distance from the sun. To maximize the thrust-to-weight ratio, NASA and L‘Garde fabricated a five micron thick (about the thickness of a red blood cell), 70 pound sail from DuPont’s thin film, Kapton. Stowed for launch, the sail fits in a space the size of a dishwasher.

However, even though the sail is ultra-thin and light, its pushing power won’t be much to sniff at. NASA expects Sunjammer to yield no more than 0.01 newtons of thrust—the equivalent of “a ‘pink packet’ of artificial sweetener.”

It’s not thrust over the short term that matters for solar sails; it’s the aggregate acceleration over time—long after conventional rockets run out of fuel. The power of sunlight is such that NASA engineers have to compensate for solar pressure when calculating trajectories.

And as an old NASA report on solar sails notes, a hypothetical solar sail launched near the sun in 2010 would gather enough speed to overtake Voyager by 2018, “going as far in eight years as Voyager will have journeyed in 41 years.” Some theorists dream we could further accelerate such a craft with a powerful laser—perhaps achieving velocities 1/10 the speed of light.

But such technology is yet far in the future. In the near term, solar sails will be more useful closer to home.

“It will be us flying to a place that a customer actually wants to fly a solar sail to,” Nathan Barnes, Chief Operating Office at L‘Garde told Space.com. “There are neat, clever, exotic orbits you can do with the solar sail that would permit viewing different portions of the sun that we can’t normally.”

Specifically, Barnes is referring to NOAA’s solar weather warning satellite (ACE) currently placed at L1 (where the Earth and Sun’s gravity cancels). ACE gives scientists about an hour advance warning of incoming solar weather. A warning system equipped with a solar sail could offset gravity with solar pressure and create a “psuedo Lagrange point” closer to the sun than L1—thus improving on how quickly storms are detected.

Solar sails could also be used to clear defunct satellites from orbit by slowing them down to burn up in the atmosphere. Or they could propel missions to multiple near-Earth asteroids instead of just one.

First, Sunjammer needs to successfully prove the technology. A key moment will be when the spacecraft unfurls its sail. NASA’s previous solar sail demonstration, NanoSail-D, spent a “month and a half stuck inside its mothership. Inexplicably, the glitch eventually solved itself and the sail sprang free. But the incident highlights how touchy the procedure can be. For the sake of future solar sail missions—and Star Trek fans everywhere—we hope Sunjammer opens without a hitch.