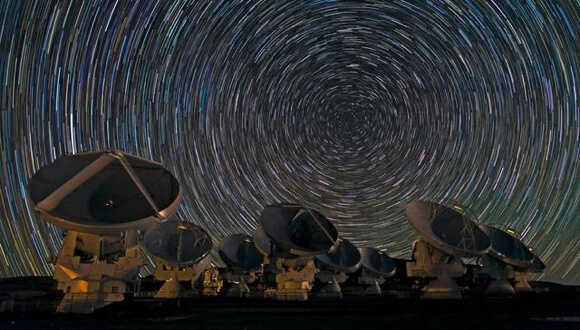 Information technology continues to invade every nook and cranny of modern life. At Singularity Hub, we tend to focus on genomics, robotics, artificial intelligence, or the Internet of Things. But another field, radio astronomy, is progressing leaps and bounds thanks also to rapidly advancing computing power.

Just recently, the world’s most powerful new radio telescope—the Atacama Large Millimeter Array (ALMA)—trained its eyes on the skies for the first time in the Chilean desert. The telescope is a linked array of 66 dishes, capable of resolving a golf ball at nine miles. That’s ten times the Hubble space telescope’s resolution! How does the ALMA see so far, so accurately? It has one of the most powerful special-use supercomputers, called the correlator, at its disposal. 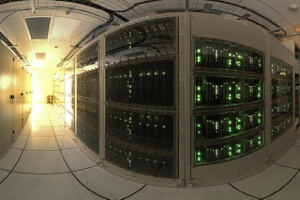 In the past, the seeing power of a radio telescope was limited by the size of its collecting surface area—think Arecibo, the giant radio dish in Contact. However, astronomers have long known a radio telescope need not be made up of one contiguous dish—theoretically it can be composed of as many dishes as you can link digitally.

Modern radio telescopes are therefore made up of tens of dishes whose signals are digitally stitched together to form the equivalent of a telescope much larger than any of its constituents. When all of ALMA’s 66 dishes are up and running later this year, they will form the digital equivalent of a telescope with a 14  kilometer wide dish—a feat scientists couldn’t have accomplished even a mere decade ago.

ALMA and its supercomputer are 5,050 meters above sea level in the driest place on Earth, the Atacama desert, to reduce atmospheric disturbance. Although radio telescopes need to be remote—civilization’s constant radio chatter can muddy the signal—their data streams must also be accessible to researchers. ALMA is connected to the relatively nearby town of Calama by 150 kilometers of new fiber optic cable and ultimately all the way to Santiago via already existing infrastructure. 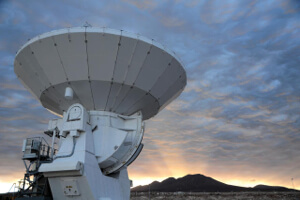 ALMA is the latest of a new generation of radio telescopes coming online. In 2012, astronomers welcomed the ASKAP Pathfinder radio telescope in Australia. These are huge projects funded jointly by large international consortiums and will serve as proof of concept for even more ambitious collaborative projects in the next decade.

ASKAP will eventually lead to SKA—a telescope incorporating thousands of linked radio sensors in Australia and South Africa. Whereas ALMA and ASKAP make use of the most powerful computers to date, SKA will require computers another 100 times more powerful—a level of supercomputing known as exascale.

But why spend so much time and money (ALMA alone cost $1.3 billion) building these telescopes? Modern physics was born when Copernicus, Kepler, Galileo, and Newton looked skyward to ponder celestial motions. Similarly, while we study high energy physics in particle accelerators like the Large Hadron Collider—our Earth-bound accelerators will never match the high energy physics lab directly overhead. We need only keep looking up—and augment our eyes with a supercomputer or two!