At the beginning of March of this year, a radical surgery was performed on an American patient: 75 percent of his skull was replaced with a 3D printed implant. The company that produced the implant, Oxford Performance Materials, made the announcement though offered little detail about the patient or the procedure. The surgery was given the green light by the Food and Drug Administration in February.

The implant is called the OsteoFab Patient Specific Cranial Device (OPSCD) or OsteoFab for short and is made from polyetherketoneketone (PEKK) thermoplastic through an additive manufacturing process. This material is not only biocompatible but is bone-like and will not interfere with x-ray scanning. After the patient’s skull was 3D scanned, the custom-made implant was printed using an EOS P800 laser sintering 3D printer. By generating the implant layer by layer, details can be added that promote the attachment of bone and surrounding cell growth.

Turnaround time for receiving an implant after submission of scans is two weeks or less. 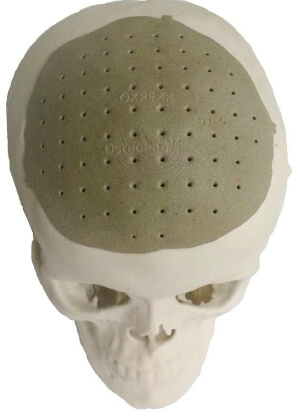 Scott DeFelice, President and CEO of Oxford Performance Materials, stated that the OsteoFab technology “is a highly transformative and disruptive technology platform that will substantially impact all sectors of the orthopedic industry.” The company projects that between 300 to 500 patients in the U.S. alone could have skull replacement surgeries each month. Additionally, it has indicated plans to expand beyond the skull to other bone replacements in the body, opening up the technology to a multimillion dollar industry.

The company has been busy developing additive manufacturing since 2006.

Now replacing large portions of people’s skulls is not necessarily new. Back in 1997, Science Daily reported on advances in implants that involved using CT and MRI scans to create a model of the skull and then have a special implant manufactured from medical-grade plastic. What’s different about the 3D printed approach is that implants are lower cost and can be customized to specifically fit the patient. Additionally, if the implant doesn’t quite work out, replacements are readily available.

Between 3D printing and stem cell technologies, the ability to replace parts of the human body are just years away.

Last year, a company named LayerWise used 3D printing to manufacture a titanium jaw replacement for an elderly patient. Doctors are increasingly turning to 3D printing to make bone models in preparation for surgery. Recently, a human ear was also produced through a 3D printing process, and 3D printing of organs is something that Dr. Anthony Atala and colleagues are busily trying to make a reality. Besides 3D printing, researchers have also used stem cells to grow bone in a patient’s skull and produce a jawbone. Other boney materials such as teeth are being actively pursued as well.

By all indications, 2013 is the year that 3D printing has come into its own, seeing widespread use across a broad range of industries. As the technologies continue to advance, we can expect even more amazing things to become commonplace and healthcare to be revolutionized. 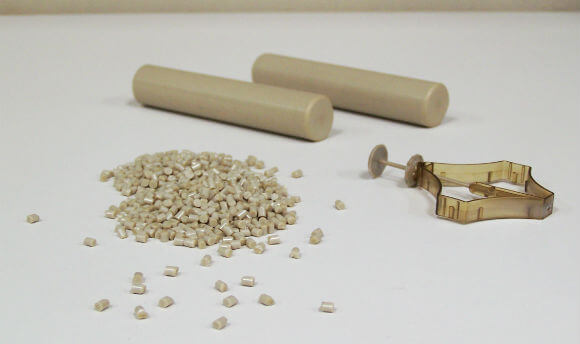