Liquid Robotics Wave Gliders have now logged over 300,000 nautical miles, traveled from the US to Australia (a record for autonomous sea-going robots), and weathered ten hurricanes. These are unquestionably tough robots. But the new hybrid version overcomes a critical shortcoming of earlier gliders—weak power in low seas and heavy currents. Now, when one of the gliders hits the doldrums or a strong current, it can switch on its solar powered thrusters to continue its mission.

The new glider is 31” longer and 70 lbs heavier than its predecessor, allowing for more than double the sensor payload by weight and volume. It now includes a weather station and wave data sensors stock.

Other updates include an adaptable power system to drive more demanding sensor configurations. Although SV3’s solar cells are 50% more efficient, the glider can optionally use wave-to-electricity power or fuel cells in addition to solar power alone. The new system allows for ten times peak payload power in comparison to the previous model (400W instead of 40W) and carries a 980 watt-hour rechargeable lithium-ion battery for increased energy storage (+315 watt-hours compared to the SV2). 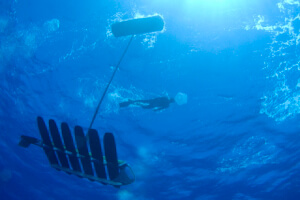 SV3 will cost $300,000 to purchase outright—a $125,000 premium over the less capable SV2. However, while some clients do choose to purchase a Wave Glider, many simply rent glider time to gather data for specific projects.

The firm’s target market ranges widely from energy firms like Schlumberger, to the US government, to fisheries researchers, to ocean and climate scientists. There are over 100 Wave Glider missions in operation worldwide.

Ex-astronaut Ed Lu of Liquid Robotics frames the need for Liquid Robotics’ robots this way, “We really know more about the conditions in outer space than we do on our own oceans.” Ocean scientists draw surface data from buoys strung across the oceans. But bouys are expensive to deploy and maintain. Because Wave Gliders can autonomously return to port for periodic repairs, pricey deep ocean maintenance isn’t required.

But Liquid Robotics Wave Gliders aren’t the only ocean-going robots. An older 3,000+ robot network, dubbed Argo, recently logged its millionth data point. Where Liquid Robotics gliders gather data from the surface, Argo’s robots dive up to 2,000 meters below the surface to record ocean salinity and temperature. Since deployment, Argo alone has doubled the total ocean data gathered by ship in the 20th century.

As computers and sensors get smaller, tougher, cheaper, more powerful, and more autonomous we’re learning to speak our planet’s language. Here’s to a long, fruitful conversation.