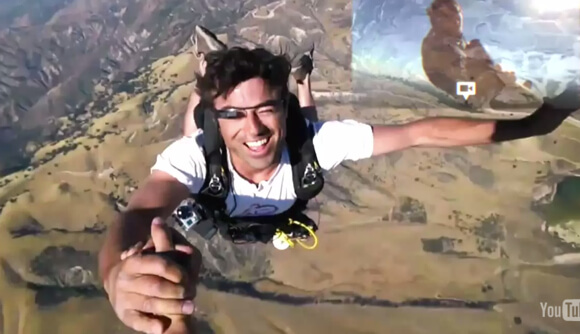 Google Glass is fast becoming the most hyped, anticipated, controversial technology trial of the year. You heard it here first—although I’m sure you didn’t—Google will ship the first Google Glass devices in the next few days. Google’s Glass Explorer program enrolled 2,000 pre-early adopters who will pay $1,500 to beta test the firm’s wearable computer, iron out the kinks, and get the PR ball rolling.

In an email to Glass Explorers, Google said the first devices are coming “off the production line right now.” Seemingly as eager to get these things into people’s hands, over their eyes, and behind their ears, Google said they’d break shipment into waves instead of waiting for all 2,000 pairs to be manufactured.

Along with the shipment announcement, Google released API guidelines for developers and a list of specifications. Glass takes 5 MP photos and 720p video to be stored on 16 GB flash memory (12 GB usable). Audio will be played by bone conduction transducer and battery life is an ambiguous full day (9am to 5pm?) of typical use (??).

The image projection (the coolest part of Google Glass) is equivalent to a 25 inch HD screen viewed from eight feet away. That isn’t much real estate, but likewise it won’t obscure your view. Presumably, if they can figure out how to do it, future iterations might expand the screen further, overlaying more digital information on the analog view.

Google Glass hooks up to the Internet over WiFi or via the cellphone in your pocket, which makes the device less revolutionary—more of an extension of your smartphone than its replacement. Further, iPhone users are out of luck. The MyGlass app only works on Android currently.

Though there’s more than a little excitement in the technology community—$1,500 is no small fee to be a beta tester—now that Google Glass in practice is becoming a reality, there’s a growing chorus of worry too. Mark Hurst of Creative Good perhaps sums it up best, “The Google Glass feature that (almost) no one is talking about is the experience—not of the user, but of everyone other than the user.”

When talking to someone wearing Google Glass you won’t know if you have their attention or if they’re looking at their display. And you won’t know if they’re recording the conversation. Of course, you can simply ask them to take off their specs. But the concern runs much deeper than that—it’s about the people you don’t know.

More advanced versions of Google Glass (or wearable computing, in general) may become continuously cloud connected and capable of nonstop audio and video recording. An ocean of data flowing into Google’s servers may one day be searchable using face or voice recognition.

Instead of voluntary information release, you may be recorded every moment you’re in public, without your knowledge or consent. As future iterations of the tech become less obvious, say, embedded in a contact lens—“there will be no opting out.”

“A single search query within Google’s cloud—whether initiated by a publicly available search, or a federal subpoena, or anything in between—will instantly bring up documentation of every word you’ve ever spoken within earshot of a Google Glass device.”

It’s a terrifying 1984-like vision where state surveillance isn’t forced upon us; we willingly and thoughtlessly collaborate to make it happen.

The power of information is only increasing, and in the wrong hands, could be devastating. At the same time, I wonder if in hindsight we’ll view such arguments as archaic—worries for generations that didn’t grow up with the Internet, smartphones, and social media recording everything from their first words to their 21st birthdays.

The definition of privacy has already changed drastically. Perhaps Google Glass is more movement along that same inexorable path. The fears are plausible, but the benefits outweigh them, and society adjusts. In either case, now is the time to start the conversation, not end it. We’ll know more when and if Google Glass and its kin move past the hype and hypothetical and into practical use.