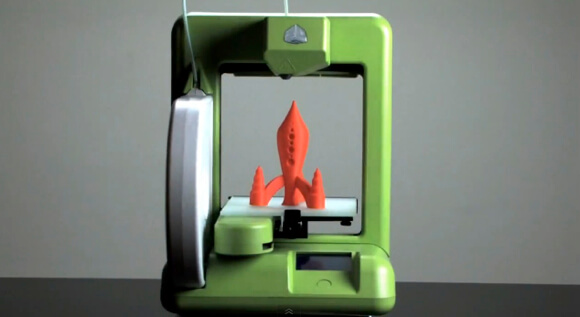 Though industrial firms have used additive technologies in rapid prototyping for years, the tech is still fresh and growing in the consumer segment. The latest sign of the 3D printer home invasion? Retail office supply chain, Staples, says they’ll sell the 3D Systems Cube 3D Printer online and in retail stores by the end of June.

The $1,300 Cube connects to your home PC over Wi-Fi, allowing it to access and print 3D digital templates in plastic. The printer can print shapes that fit inside a cube 5.5″ to a side. Printing cartridges come in 16 colors which, along with other accessories, may also be purchased at Staples.

To the extent additive technologies have expanded beyond industrial uses, it’s been in the maker/DIY crowd. Currently, 3D printers are primarily available for purchase in specialty retail locations like Makerbot’s New York store or online. Wider availability of the Cube at retail stores like Staples may similarly widen the captive audience—but then again, it may not.

To date, printers like the Cube print small, monochromatic plastic objects from a template. You can also make custom items. However, although 3D modeling is getting easier, users still have to master the software before modeling and printing any design they can imagine. Mastery takes time and motivation.

That may make $1,300 too steep for a mainstream audience, even if the printers are available at mainstream outlets. Beyond novelty items, home 3D printers aren’t essential for average users yet.

Wohlers 2013 annual report on 3D printing notes that after growing gangbusters from 2008-2011 (346% annually), the low-cost personal 3D printer market slammed on the brakes (relatively speaking) in 2012, growing only 46%. Wohlers says, “Most of these machines are being sold to hobbyists, do-it-yourselfers, engineering students, and secondary and postsecondary educational institutions.” 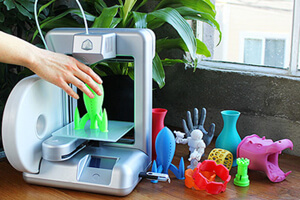 It’s a relatively limited market segment, and perhaps one that’s become somewhat saturated. Moving towards a more mainstream market may require an even lower price point and higher functionality and ease of use.

Autodesk president and CEO, Carl Bass, recently weighed in on the hype and hope of 3D printing in Wired. Despite being around for years, he says 3D printing is still an immature technology.

Including these other technologies, Bass thinks mass production runs may soon go the way of the dodo. 3D printing, specifically, will evolve from rapid prototyping to limited production. Key to this transition will be software like Autodesk’s 123D Catch (or the like). “Just as rip-mix-burn became the anthem for digital music, we are starting to do the same thing for the physical world with capture-modify-print (or download-modify-print) using only the cameras on our cellphones to inform computer vision algorithms.”