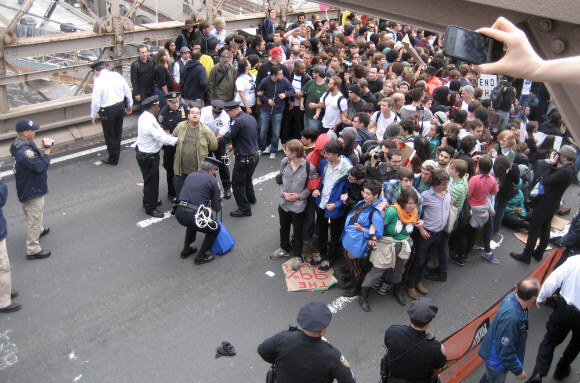 Two years ago, Alvin, a teenager in Harlem, was walking down the street when he was approached by three NYPD officers. Without providing a valid reason for the stop, the officers proceeded to interrogate him, beat him, and threaten him with arrest for, as they said, “being a f**king mutt.”. What the officers didn’t know was that Alvin had been secretly recording the terrifying incident on his phone.

Few Americans know what it’s like to live under the constant horror of “Stop and Frisk” – but for one moment at least, the rest of the nation could hear what it was like. They could feel the terror of a scared teenager cornered by aggressive authorities trying to provoke a violent reaction; they could hear first-hand the racial slurs and abusive language that civil rights groups have long complained about. By creating one of the only known recordings of the controversial practice, Alvin succeeded in finally drawing public scrutiny to the deeply divisive program that has been shrouded in administrative secrecy.

This single instance demonstrates the type of transparency that can be achieved with simple technology when it is used in the right context. In a major departure from the past, almost everyone nowadays can become an instant reporter with little more than the phone in their pocket and an internet connection. This change has renewed the ferocious legal, moral, and technological debate that has raged for decades over whether citizens should be allowed to record the actions of law enforcement.

As surveillance technologies have matured in both their sophistication and usage, some are starting to ask the question: is it time we start using them to watch the watchers?

One of the largest proponents for this is, surprisingly, the police themselves. The vast majority of officers act professionally as they do the dangerous, unglamorous work of keeping the public safe while working to prevent and respond to crime. Despite putting their lives on the line for others every day, they still face numerous accusations of misconduct every year, damaging their credibility and costing tens of thousands of dollars in legal fees and payments — sometimes even more.

The proliferation of dashboard cameras has reduced liability costs, provided valuable evidence, and made police officers safer. The next progression would naturally be for the camera to move out of the car and onto the officer’s uniform itself. In fact, this is already happening in many parts of the country: last month, in an attempt to clean up its image, Seattle PD became the latest department to equip its officers with wearable cameras.

In The Verge appears a fascinating report about the company behind the non-lethal stun guns that have become commonplace around the world, Taser International, which has set out to transform policing once again – this time, with Axon Flex, a head-mounted camera with a twelve-hour battery life that officers can use to record interactions. The device is constantly on, but it only captures video of the thirty seconds before its wearer begins using it, and then both video and audio while police are speaking to a citizen. Footage is then uploaded to a cloud-based service where it can be accessed by the police department. It includes an audit trail to reveal who has accessed the information and when.

Initial experiments with the device show promising results. A year-long study conducted with the Rialto, California Police Department showed that even though only half of the force was equipped with the devices, overall complaints filed were lowered by 88%, and officers used violence 60% less often, than previously. That may be because cameras change behavior; we act differently when we know we are being recorded, and that is true on both sides of the camera.

It would be a mistake, however, to think that the presence of the device itself will guarantee any type of lasting improvement.

The success of these initiatives will instead be determined by how the footage is ultimately used, in what situations, and with what type of oversight. It is critical that it be not just a tool for police surveillance: the public should have access to records of their own interaction as well, in a clearly defined, transparent manner. Police footage is generally considered public records, but there are many cases in which authorities simply refuse to share the footage. Without the corresponding policies and enforcement in place, potential gains in accountability are effectively meaningless.

For that reason, there must be parity. Citizens should be protected in their right to record their interactions with law enforcement to restore balance to the equation.

It is shocking, but there is a handful of states where this is considered a criminal activity. Perhaps the most extreme case is Illinois, where legislators have tried to enforce backwards laws that make recording interactions with police a Class 1 felony that can carry a prison term of 15 years. Even where such laws don’t exist, police have been known to intimidate, confiscate devices, and use other lesser charges to force people to stop filming. The Justice Department has tried to step in and take action against this by labeling these practices unconstitutional and arguing that they violate First and Fourth amendments. Still, they haven’t gone nearly far enough.

In courthouses, newsrooms, and YouTube comments sections nationwide, questions of appropriateness will continue to be debated fiercely. It is important that we avoid making the perilous work of law enforcement any more difficult. And no one would want domestic-abuse victims to be afraid to seek help because they do not want to be recorded. Trust is difficult to restore and maintain for a reason, and public safety can only be achieved through faithful cooperation between the police and the communities they protect.