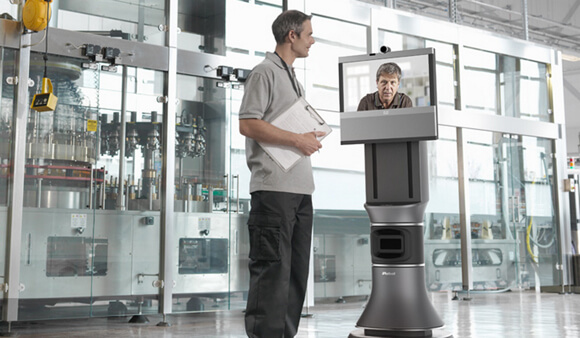 If Cisco and iRobot have their way, robot CEOs may invade boardrooms from Tokyo to New York in 2014. The two companies recently announced collaboration on the autonomous Ava 500 telepresence robot for business. The firms hope the Ava 500 will allow business people to attend daily meetings in person, across the planet—without ever changing a plane or time zone.

The navigation technology behind iRobot’s Roomba robot vacuum cleaner and the RP Vita medical telepresence robot will guide the five foot five inch, 100 pound Ava 500. Meanwhile, a Cisco TelePresence EX60 personal video endpoint will broadcast a worker’s face and voice from its 21.5″ screen and send back sounds and images via an onboard camera and microphone.

Using a special app on a tablet, remote workers will wake the robot up and tell it where to go. The Ava 500 can map and autonomously navigate the halls of its home office, freeing the telecommuter to make small talk along the way (or leave the screen off until it reaches its destination). After a meeting, the unit dutifully returns to its charging station to catch a few winks and juice up for its next appointment.

iRobot CEO, Colin Angle, told the Boston Herald the Ava 500 gives folks the chance to be in the same room as the people they’re meeting, to see facial expressions, and to go in the hall after for a private chat. Angie Mistretta, director of telepresence solutions at Cisco, says, “The real value of the robot is that spontaneity.”

The question is whether that spontaneity is worth the robot’s $70,000 price tag (or $2,000 – $2,500 a month to rent). iRobot and Cisco are targeting executives, corporate trainers, site inspectors, and remote employees. Travel costs for these folks can stack up fast. If Ava 500 saves even a few trips a month, the robot could pay its way.

But businesses are cost cutting machines. If telepresence robots are attractive at $70,000, then they’re even more appealing at $7,000, and exponentially sexier as the price tag approaches $0. And already, firms can order a simpler telepresence robot from Double Robotics for $2,599. Businesses may be willing to sacrifice a little screen real estate and autonomous navigation for $67,000 in saved costs.

And they may not need to make that sacrifice very long. Advanced AI and robotics are entering the consumer market at drastically reduced prices.

We recently wrote about AI startup Anki. Anki’s robot cars drive themselves around a track at top speed, avoiding each other, the wall, making evasive maneuvers—all this runs on iOS with an expected cost of $200. But Anki isn’t just about toy cars. It’s an iOS-powered consumer AI and robotics platform.

Such technology will just as easily guide an autonomous telepresence robot through the office. And soon. Offering enterprise solutions at enterprise prices in a world where AI and robotics are hitting consumer markets at consumer prices—how long will such products make sense?