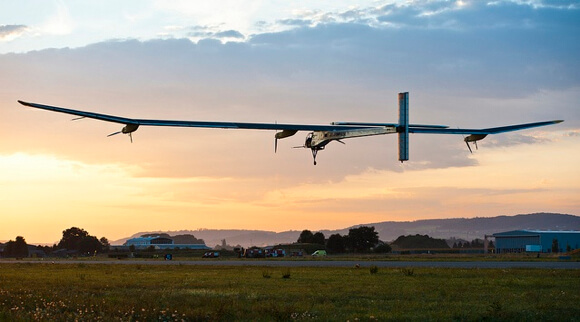 The solar-powered plane, Solar Impulse, recently touched down at New York’s JFK after flying the final leg of its journey across the US. The trip, a decade in the making, was itself but another step on the Solar Impulse team’s quest to fly around the world on solar power alone, and ultimately, to realize the dream of perpetual flight with no fuel.

Solar Impulse flew from San Francisco to Phoenix, Dallas, St. Louis, and Washington DC on its way to NYC. In each city, the team organized an event to show off their plane, proselytize, and chat with local and national politicians and celebrities. The aircraft performed admirably until the tour’s final leg, when an eight-foot tear in the fabric under the wing forced the pilot to land a few hours earlier than planned.

Given the experimental nature of the technology, the team took heart the prime issue was a relatively simple fix.

Though Solar Impulse is neither the first plane to fly under solar power, nor the first such machine to cross the US—it may be the best demonstration of solar flight to date. The aircraft holds three world records for manned solar-powered flight, including the highest flight (30,300 ft), the longest flight (26 hours), and the farthest flight (693 miles). Crucially, the plane is capable of flying overnight, relying entirely on batteries charged by the sun.

The Solar Impulse project, first launched in 2003, commenced building in 2008, and the team completed their prototype mid-2009. Although the plane is blanketed in close to 11,000 solar cells and over a quarter of the aircraft’s mass goes to energy storage in its lithium batteries—the aircraft’s four engines knock out a mere 40 horsepower.

To make up for the weight of the batteries, engineers built the 21-meter fuselage using carbon fiber and further lightened the load with bolts and screws made of Solvay PrimoSpire, an ultra-light plastic as hard as metal.

Solar Impulse’s wings are as long as an Airbus A340, but the plane’s total weight is a mere 3,527 lbs—or a little more than a Porsche 911. Because the rest of the construction is so light, the aircraft is able to take off and fly under its own power, day or night. But even so, the plane’s average ground speed on the DC to NYC flight was a sluggish 16 mph. The trip took 18 hours, 23 minutes.

After wading through the project’s epic webpage—rife with references to Jules Verne, the Wright Brothers, Charles Lindbergh, and Chuck Yeager—you might at first be underwhelmed by the technology itself.

Sure, it’s solar powered, but it takes six times longer than Amtrak to go from Washington to New York. It’s hard to imagine a solar-powered aircraft replacing commercial airliners, the worst polluters in the air, anytime soon. The optimized Solar Impulse barely accommodates the weight of one passenger—never mind several hundred with luggage in tow.

But the likelier benefit? Folks will find other applications for solar flight. How about using a fleet of solar drones to replace expensive satellite infrastructure? Like Google Loon, minus the balloons. Or might an aircraft that can circle the globe without fuel be useful for reconnaissance? Sure! The technology has potential—even if the delivery is slightly overdone.