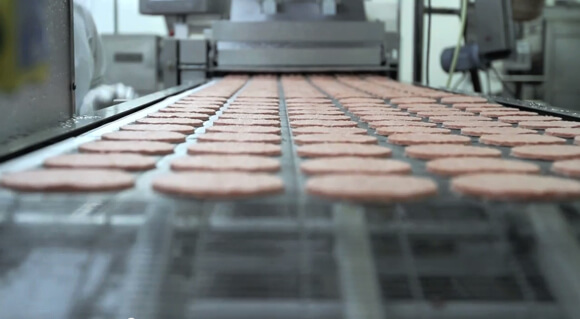 “Hey! If you were a hotdog, and you were starving, would you eat yourself?” That’s Will Ferrell as Harry Caray contemplating deep ethical questions. Here’s another more realistic one, “If your ballpark burger were grown in a petri dish, would you eat it?”

A food writer, a food researcher, and a scientist attempted to answer that question Monday, when they tasted a lab-grown (or cultured) burger at a press event in London. The burger itself was grown in about three months, but the technology behind it took Maastricht University’s Professor Mark Post €250,000 and five years to develop.

We covered the story back in 2009, 2012, and more recently, in May of this year. The specifics haven’t changed terribly much, but one item most certainly has—always referred to as a “mystery investor,” the money man behind the project was recently revealed as Google’s Sergey Brin. In fact, he makes a cameo in the team’s pitch video.

How exactly do you make a burger in a lab?

Once anchored in place the ring of cells reflexively contract (no electric current necessary) and grow into a strand of muscle tissue. 20,000 such strands went into the finished burger. Each cell can create a trillion more like it, or as Professor Post notes, just a few cells become ten tons of meat.

Of course, the question of the day is, “What does this cultured beef burger taste like?”

Post was joined by Chicago food writer, Josh Schonwald, nutrition researcher, Hanni Rützler, and a chef, Richard McGeown, to cook the burger. Because the patty doesn’t naturally look exactly like a real burger—it lacks fat and blood—the researchers colored it with beet juice and saffron. McGeown noted it cooked just like a traditional burger.

As for the taste, let’s just say, it’s light years from “soggy pork” but would still be a challenging secret ingredient on Iron Chef. Rützler and Schonwald agreed the texture was very meaty but lean and not terribly juicy. Further, the taste was clearly lacking something—most likely added flavoring from fat.

Post told the audience the team is working to add fat, but culturing fat cells isn’t as easy as culturing muscle cells. He reiterated the burger is a proof-of-concept. Now that they’ve shown it can be done, it’s time to perfect the process. And along those lines, he said, “I think it’s a very good start.”

Cultured meat research is largely driven by the sense that the modern meat industry is unethical, unhealthy, and unsustainable. Theoretically, lab-grown meat would eventually be nearly identical to meat from a living cow, chicken, or pig, would remove the need to slaughter the animal, and would consume fewer resources in production.

Although Post’s cultured burger got an avalanche of press with his special London event—over 200 journalists and academics attended—there are others at work on cultured animal products. Singularity University’s Modern Meadow, for example, uses tissue engineering to create cultured leather and plans to apply similar technologies to meat production in the future.

We contacted the founder and CEO of Modern Meadow, Andras Forgacs, to put the London demonstration in perspective. He told us, “It still needs work in terms of flavor and becoming entirely animal slaughter-free, but it was an important proof-of-concept.” The fact the meat was visually pleasing, cooked well, and had a favorable mouth feel made the event a milestone in cultured meat.

So what’s next? As one journalist in the audience pointed out, there’s really no reason to stop at cows. Once perfected, you can take cells from any bird, mammal, or fish. And Forgacs notes that while the current focus is understandably on meat, similar “solutions are needed for other animal products which deplete the environment and cause animal harm—such as ivory, rhino horn, leather, shark fin, etc.”

As for meat, according to Post you won’t be buying tiger, bear, or penguin patties too soon—or even beef ones, for that matter. He estimates it’ll take a good 10 to 20 years to bring the tech from lab to grocery. That said, sometimes things move faster than even the experts expect. Forgacs said, “A decade is realistic for grocery sales. Twenty years is hopefully too conservative. Before then, however, I anticipate cultured meat being available at private tasting events and perhaps some adventurous restaurants.”