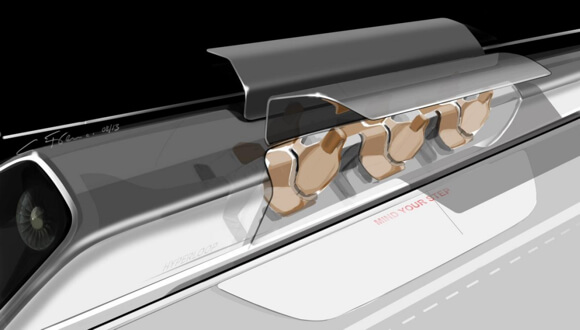 Elon Musk has long been hinting at a high-speed form of transportation enigmatically named the Hyperloop. Earlier this summer, he promised to reveal his Hyperloop plans in August. After a round of media hype and an all-nighter with his engineers at SpaceX and Tesla Motors, Musk recently posted the 57-page Hyperloop Alpha plan online.

The man isn’t known for moderation, and the Hyperloop isn’t exactly conservative. Though he says the plan is based on existing technology, the cost and design are so far on paper only. There are no proposals to build a prototype or scale it up.

What is the Hyperloop? After rampant speculation, we now have a very detailed vision. The Alpha plan calls for two 350+ mile tubes (one in each direction) placed side-by-side and elevated on concrete pylons. Linear electric motors accelerate a 28-passenger pod up to 760 mph and give boosts at 70-mile intervals along the way. 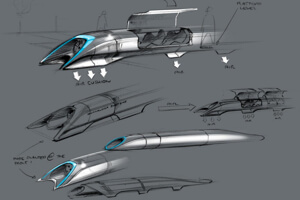 At high subsonic speeds, the pods face significant resistance from the tube and air. Other proposals, like ET3, solve these problems with magnetic levitation, or maglev, and a vacuum tube.

But Musk says lining the tube with magnets is too expensive, and it’s incredibly difficult and costly to maintain a vacuum over hundreds of miles. (See here to learn more about ET3.)

His plan offers a novel way around these obstacles. First, the tube will be kept at a pressure equivalent to flying at 150,000 feet. This low-pressure environment is easier to maintain than a vacuum but still minimizes air resistance.

To further mitigate drag, each pod will carry an electric compressor fan up front to pass 60% of the air through a rear exhaust. Musk says the fans are like “a pump at the head of syringe actively relieving pressure.” The rest of the air will be directed into perforated skis that levitate the vehicle (the reverse of a puck on an air hockey table).

The pods will be pressurized, and in the event of a loss of pressure, oxygen masks will drop down. Due to the trip’s short duration, in an emergency, passengers will alert the station but otherwise continue along to their destination. The time to help will likely be less than in an aircraft—which requires rerouting, clearing runways, and taxi time.

Inside each pod, passengers sit in form fitting seats with personal entertainment systems mounted overhead. Initially, they’ll feel acceleration equivalent to liftoff in a commercial jet, and thanks to controlled banking in the tube (think bobsled) and variable speed, the sharpest bends will exert only light forces on folks.

To avoid significant curves and the cost of buying land, the Hyperloop tube follows the relatively straight path of interstate highway I-5. Solar panels will line the top of the tube and provide not only enough energy to run the Hyperloop, but potentially more. The support pylons will be equipped with dampers to help them adapt as the land settles, the structure flexes with temperature changes, or during an earthquake.

The Hyperloop will send travelers from San Francisco to Los Angeles in about half the time (35 minutes) and at a fraction of the cost ($20 one way) of current or proposed alternatives. Musk estimates the Hyperloop’s 40 pods could shuttle 7.4 million people each way every year, and the system could be expanded to include more stations. 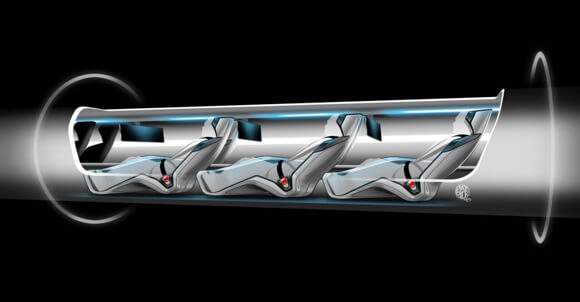 Although the plans are very detailed, and Musk and his cadre of engineers are some of the brightest in the world, there’s plenty of room to be skeptical. Musk knows they haven’t thought of everything (eg., an onboard bathroom), so he wants to flesh out the plans in an open source environment. Ideas are welcome.

But, of course, plans are paper. The Hyperloop won’t gain much traction outside the media without a real world, proof-of-concept prototype. Although Musk was initially reticent to take the project on—recently noting he may have made a mistake talking about it and that his plate is full at SpaceX and Tesla—he now says he’s considering working up at least a prototype.

Musk’s stated goal is to improve on California’s $68 billion high speed rail project, an undertaking he says will be one of the slowest and most expensive per mile. But are we to believe his Hyperloop cost estimate of $6 billion? That number would be more realistic if Musk himself built the Hyperloop. But if it’s up to the state? Forget about it. Cost overruns are inevitable.

That said, even at five times the estimated budget, the project would be half the cost of  high speed rail. And at 10 times the budget, or a cost equivalent to high speed rail, we’re still talking massive improvements on speed, travel time, and ticket cost. (And that’s if high-speed rail hits its stated budget—which it won’t.)

But forget about all the practicalities for a moment. The Hyperloop has inspired a debate about what’s possible beyond bureaucratic group-think. There are other proposals out there, but no one of Musk’s stature is standing up and backing them.

I don’t subscribe to the Peter Thiel school of thought that we haven’t accomplished anything of note recently. The information age enables folks to Tweet their breakfast and research, propose, and develop radical cancer diagnostics—as Jack Andraka recently demonstrated at age 16. Open information is enabling faster innovation.

That said, it’s valid to note that some technologies, like transportation, have been stuck in neutral since the 70s or earlier. And that’s where big thinking from the likes of Musk is more than welcome. If the guy building rockets at a fraction of traditional costs says we can do better than a moderately improved 19th century technology—maybe we can.