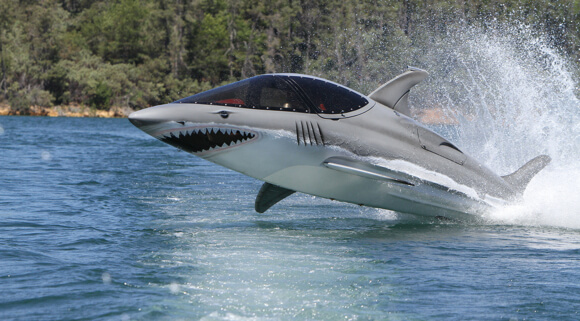 Innespace’s Seabreacher series is biomimetic. Sort of. These special watercraft behave just like a shark or killer whale might—if said sea creature had rockets strapped to its fins. But in case you still aren’t sure what inspired the Seabreacher, its paint job should erase all doubts. Yes, that’s a shark. Seabreacher may not positively affect the lives of billions worldwide, but it might positively affect your day to watch this video.

Innespace offers three Seabreacher models—dolphin, killer whale, and shark. Each step up the food chain and down the evolutionary ladder gets more extreme.

The shark-inspired Seabreacher X offers a supercharged 300 horsepower engine. And although it isn’t on four rubber tires, its power-to-weight ratio compares favorably to a Lamborghini, McLaren, or Bugatti supercar.

The Seabreacher X’s top speed is around 50 mph. It can skid above or dive below the water and uses its fins to turn on a dime. Special maneuvers include breaching and barrel rolls. Each model boasts an audio system and camera with which to pound the waves, blast Van Halen, and record fist pumps.

Expect to pay at least $80,000 for one of these extreme toys. But if you don’t have that kind of cash, Innespace says a number of their clients are considering setting up rental facilities. One imagines such facilities might round out their portfolio with a few water-powered jetpacks for an action-packed day at the seaside.