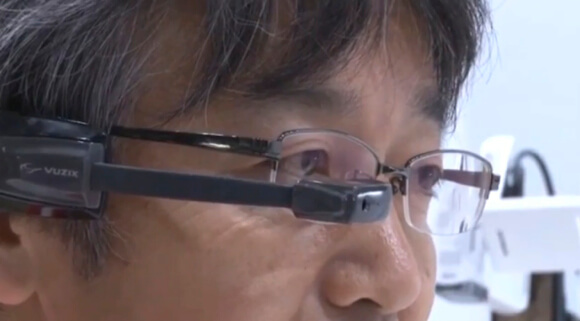 If Star Trek or Hitchhiker’s Guide to the Galaxy have the right of it, language will be a negligible barrier when fraternizing with aliens. But before worrying about extraterrestrial translators, it might behoove us to work on the terrestrial sort first—and Japanese telecommunications firm, NTT Docomo, is doing just that.

Many of us are already familiar with the translation part. Google effortlessly translates words, phrases, and webpages. But lugging around your laptop while sightseeing in Tokyo isn’t exactly convenient.

The next most obvious solution would be something mobile, like a smartphone. But according to Docomo’s Shinji Kimura, “We’d already developed this augmented reality app for smartphones which translated text where you pointed your camera. But it felt really unnatural.”

Smart glasses make more sense for translation. They live outside your pocket and are positioned to take in the world like you do. Cameras, microphones, speakers, and augmented reality displays might work in concert to pick up spoken and written words, translate them, and someday transmit a response.

For now, of course, the technology is still being developed. Docomo’s translation app sends visual information recorded by the glasses’ camera to a server in the cloud. Character recognition software reads the text, translates it, and sends the translation back to the glasses’ viewfinder—overlaying it on the document (a menu, for example).

Docomo plans to refine the app and thinks it might be a hit with visitors to the 2020 Olympics in Tokyo. Wearing a pair of smart glasses equipped with their translation app, tourists might more easily read menus and signs—and no doubt be mightily entertained by a few humorous mistranslations.