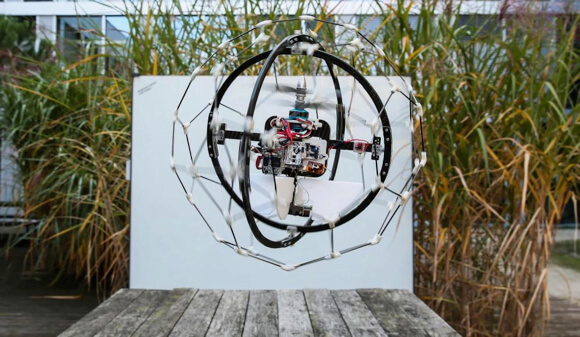 As sensors and microchips get smaller, cheaper, and more powerful—it’s tempting to use them for everything. But sometimes simpler is better.

Instead of stereoscopic cameras, radar, and complicated algorithms, an EPFL team equipped their latest flying robot, GimBall, with the equivalent of a seeing-eye cane to help it navigate tight, cluttered spaces.

GimBall is attached to a light spherical cage that rotates with collisions while the inner robot remains stable (like a gimbal, its namesake). GimBall’s cage makes it mostly collision-proof and even informs its flight pattern. The robot evokes an insect repeatedly flying into a window until it finds open space and freedom.

To test GimBall, the team set it loose in a forest, where programming a traditional robot through the trees would pose a thorny problem, and colliding with a tree might mark the end of the experiment. GimBall on the other hand is free to collide with as many objects as it likes, and each collision helps reorient the system.

GimBall’s inventors said, “This platform allowed us to realize that autonomous navigation was much simpler once you can afford collisions: advanced sensors are not required, and the obstacles can even be used to guide the robot.

Instead of programming a complicated flight pattern or series of autonomous interactions—Gimball can be instructed to take a straight path through the forest. Like an insect, it crashes into things and simply resumes the original flight path.