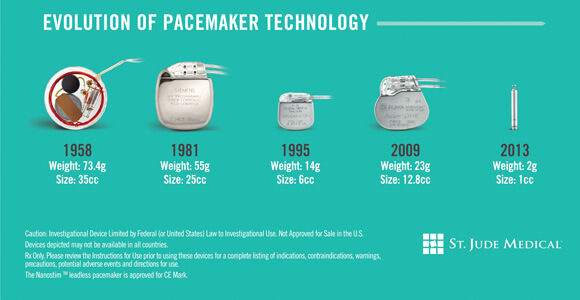 Throughout the history of medicine, many devastating illnesses were first treated with dangerous, sometimes even barbaric, methods that initially seemed almost as bad as the sickness. Over time, those treatments get refined and it becomes hard to believe that people once died of epilepsy, for example, or from what seem now to be minor heart conditions.

Many types of arrythmia, for example, that used to kill patients no longer do. More than 4 million people around the world wear pacemakers. But it’s still a serious matter to have life-saving pacemakers installed and a limitation to live with one.

But in the coming year, it will likely become significantly easier to receive and live with a pacemaker.

Developed by Silicon Valley startup Nanostim, a device about the size of a AAA battery, or one-tenth the size of a conventional pacemaker, was recently approved for use in Europe. It is installed through a catheter in the femoral vein in a minimally invasive procedure. Then, for about 10 years it sits inside the ventricle of the heart and delivers its regulatory electrical pulses wirelessly.

“For the past 40 years the therapeutic promise of leadless [or wireless] pacing has been discussed, but until now, no one has been able to overcome the technical challenges,” Dr. Johannes Sperzel of the Kerckhoff Clinic in Bad Nauheim, Germany, said in a news release. 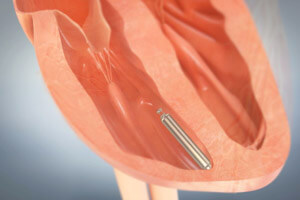 The first pacemaker was the size of an ice hockey puck and had to be installed in the abdomen. Currently, most are about the size of a watch and are installed in a “surgical pocket” under the skin near the collarbone. The padded wires, or leads, that feed down to the heart to stimulate it cause many patients discomfort.

“I definitely think this new pacemaker technology will improve patients’ quality of life. Already they can mobilize very soon after the implant,” said Dr. Reinoud Knops of St. Jude Medical. Infections, the major cause of mortality among patients receiving pacemakers, will also likely decline, Knops said.

The pacemaker is still undergoing clinical trials in the United States.