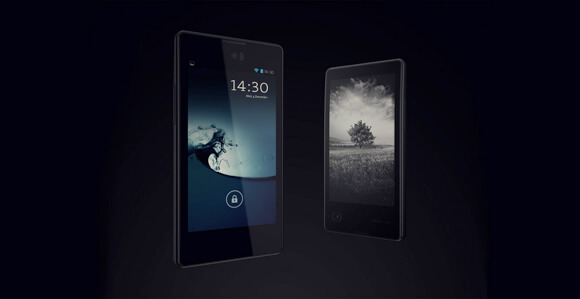 Ever wish your phone could swap between LCD and e-ink displays to save power? Wish no more. Yota Devices’ YotaPhone, a darling of this year’s consumer electronics show (CES), offers both an e-ink screen (like the Kindle Paperwhite) on one side and a standard LCD display on the other.

Otherwise, the YotaPhone is mostly equivalent to your typical smartphone, though it runs a slightly outdated version of Android on an also slightly outdated dual-core processor. The phone will set you back €500 and is currently available in Russia, Germany, Austria, and Spain. Version two is due out in 2014.

So, you may find yourself asking, what’s the point of a dual-display phone? Well, e-ink text looks really lovely. It’s easy on the eyes, non-reflective in bright light, and most importantly, doesn’t suck battery life with the vampiric ferocity of a backlit LCD.

With a second e-ink display you can compulsively check email and Facebook or read a book or periodical without draining power.

Yota Devices CEO, Vlad Martynov, told CNET, “It’s a good platform to express yourself and differentiate yourself as you can put any image on the back of the phone.” That might include baby hedgehogs or the day’s schedule.

So much for theory. How does the YotaPhone perform?

CNET dedicates almost 2,000 words to YotaPhone here. In short, the phone’s design is not terribly sleek. It’s heavier than your average device and has a clunky gesture-based interface.

Meanwhile, the e-ink display’s resolution is too low to do text justice, and it tends to get scuffed (impermanently) pretty easily. Not a good thing for something that goes in your pocket next to coins and keys.

It’s not that the YotaPhone is a bad idea, just that its added functionality doesn’t appear to make up for losses in the design category. And for the money, you can either buy a Kindle, a case with a second e-ink screen, or a better phone minus the extra display.

Maybe we’ll see other, better dual screen smartphones. YotaPhone mark two, perhaps. But it may just make more sense to add extra displays somewhere other than the back of your phone. The Pebble smartwatch, for example, puts that second display somewhere altogether more convenient—your wrist. It solves a similar problem, only more elegantly.