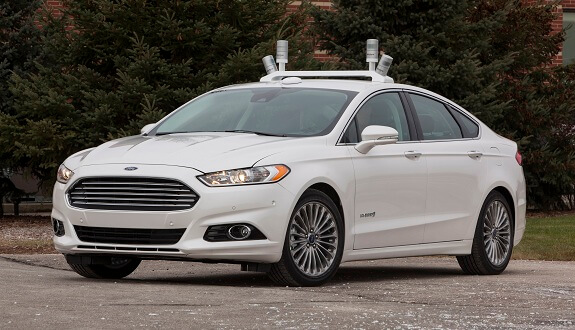 In 2013, major automakers either forecasting self-driving technologies or announcing their own included Mercedes, BMW, Nissan, Volvo, Tesla—and now, you can add Ford into the mix. The Michigan automaker said they’re working with the University of Michigan and insurer, State Farm, to develop mostly driverless technology by 2025.

The Fusion’s computer communicates with external sensors to operate the wheel, accelerator pedal, and brakes. Like a number of other cars, it can stay in its lane on the highway, maintain a safe following distance to the car ahead of it, and park itself.

A newly unveiled Fusion is a test vehicle for more advanced automation technology. The prototype car uses LiDAR to bounce infrared light off its environment to create a detailed 3D map of the car’s surroundings up to 200 feet away.

Beyond onboard sensors, Ford believes future cars will also need to talk to each other. When one car brakes hard, for example, it will alert the other cars in its immediate vicinity so they can take the appropriate action.

Ford Executive Chairman Bill Ford said, “We see a future of connected cars that communicate with each other and the world around them to make driving safer, ease traffic congestion and sustain the environment.”

It’s not always crystal clear what carmakers mean by ‘self-driving.’ Most, it would appear, do not believe we’ll cede all control in the near future. But the specifics get lost in the chatter. It was, therefore, a breath of fresh air when Ford’s Raj Nair, head of product development, defined terms as far as Ford is concerned.

“What we do not mean is a ‘driverless car’; so if you had visions of sending your kid off to school in a car while you go back in the house for another cup of coffee, that’s not what we’re talking about in the near time.”

That is, the driver will still be behind the wheel in case of system failure and the car will go on autopilot only in special circumstances.

It’s a slightly deflated vision of the popular storyline that we’ll have fully driverless cars with AI onboard—fleets of Google taxis putting Ford and Chevy out of business.

All that may happen, and of those working on the tech, Google is at the forefront. The firm has already been testing highly automated cars on California and Nevada public highways for a few years.

But there’s a tendency for tech to over-promise and under-deliver exciting new capabilities. Don’t get me wrong. Fully driverless cars would and may yet be amazing. But even far more automation, if not complete automation, would have significant benefits—most centrally, and hopefully, fewer fatalities on the road.