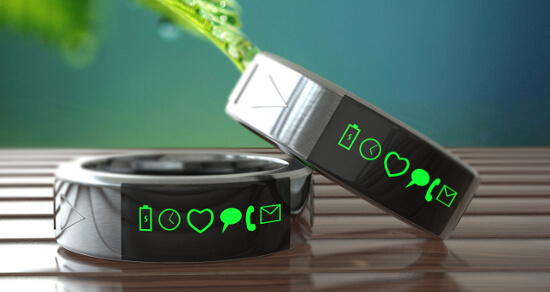 The makers of Smarty Ring hope to reduce the number of times you check your smartphone everyday. The ring connects with iOS and Android devices to deliver alerts for texts, emails, phone calls, and social media. You can also control music, take pictures, accept or reject incoming calls, and make outgoing calls to favorite numbers.

Smarty Ring’s LED screen (blue or green) displays the time or works as a stopwatch or timer, and the device also functions as a tracker. You can ping your phone, and it’ll go off even when in silent mode. Or if your ring and phone become separated—perhaps you left it behind at the café or someone just stole it—Smarty Ring will alert you.

Smarty Ring comes with an app to set and adjust the ring’s settings and a 24-hour battery powered up on a special inductive charger with two ring slots and a pad for compatible phones. (The picture shows what appears to be an iPhone—but to date, iPhones can’t be charged inductively.)

The ring itself is to be made of stainless steel and custom fit to your finger, and thanks to its waterproof design, Smarty Ring’s creators say it “makes a great companion for a business professional on vacation who needs live updates even while swimming!”

This works, of course, only if you don’t plan on swimming more than 100 feet from your phone. And, we might add, if you need real time updates on vacation, and they can’t wait until you’re done swimming—it isn’t vacation.

Like most smartwatches, Smarty Ring looks to be on the bulky side, particularly for smaller hands. And at $275 (retail), it’s a touch pricey for fairly limited functionality.

Also, note—Smarty Ring doesn’t exist yet. All the Indiegogo campaign’s images are strictly conceptual. Delivery four months from now (April 2014) is an aggressive timeline within which to develop a working prototype and manufacturing process.