U.S. Agencies Take Significant Step Toward Wirelessly Connecting Vehicles To One Another 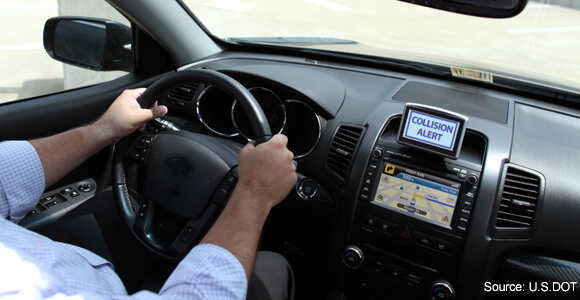 Cars that retain their human drivers despite growing numbers of self-driving vehicles will gain automated safe-driving features in the United States, according to an announcement this week that U.S. federal agencies will encourage vehicle-to-vehicle, or V2V, communication technology for passenger vehicles.

The proposal relates to a kind of internet in which the connected computers are cars and trucks sharing data about speed, position and nearby traffic signals ten times a second in order to reduce accidents. If two cars on a three-lane road simultaneously attempted to switch into the center lane, for example, the V2V system could warn both drivers. Alternately, if a car two vehicles ahead brakes, the third driver could be alerted whether or not the middle driver braked immediately.

Within the next few weeks, the Department of Transportation and the National Highway Traffic and Safety Administration will put forward a draft regulatory proposal that could go as far as to require V2V technology in future model years. The push comes in response to promising preliminary results of a year-long pilot program of 2,800 vehicles that ended in August.

If the system were to be adopted, vehicles already on the road could use add-on units to collect and share data, but new cars would integrate V2V into their own computerized systems.

The car net works on Dedicated Short Range Communications, a system similar to Wi-Fi but featuring a dedicated channel with low latency times. The V2V system now in testing cobbles together technology from multiple suppliers, put together by University of Michigan researchers. A shared protocol allows cars from different manufacturers to communicate with one another. As with any such standards, government agencies are needed to broker compliance.

More than 30,000 Americans die from traffic collisions every year. According to the DOT, the data points collected and shared through V2V could help drivers avoid four out of five crash scenarios that don’t involve drugs or alcohol. By giving information that would help them avoid traffic jams, it could also reduce congestion and the lost productivity associated with it.

“Decades from now, it’s likely we’ll look back at this time period as one in which the historical arc of transportation safety considerably changed for the better, similar to the introduction of standards for seat belts, airbags, and electronic stability control technology,” said David Friedman, the acting administrator of the NHTSA. 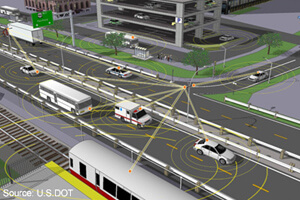 In the form used in the pilot program, the V2V network connects vehicles to one another and shares information from nearby stoplights. Eventually, the system could support two-way communication between vehicles and infrastructure and vehicles and pedestrians (insiders call that next step V2X).

Consumer privacy has already emerged as a thorny issue, since the data points together could tell anyone with access to it where drivers are going, when they will get there and how safely they’re driving.

But end game for V2X apparently isn’t nabbing human drivers; it’s ensuring that the increasingly automated cars likely to dominate the roads by 2050 are safe drivers.

“You can have an automated vehicle, but if it’s not communicating with other vehicles around it, then you really just have a vehicle acting in isolation,” Francine Romine, director of communications for the University of Michigan Transportation Institute, told Singularity Hub.

The Department of Transportation also appears to be thinking along these lines. “Many experts, including those here at USDOT, believe that V2X technology could be a building block to achieving safe and reliable highly automated and self‐driving automated vehicles,” a spokesman told Singularity Hub.

It’s been only three years since Google first announced that it had built a self-driving car.